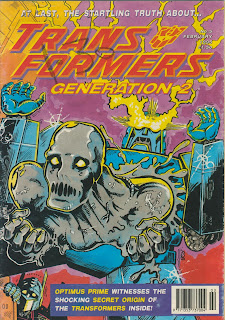 Continuing to reprint material from the US comic issue 5 (for more details see here) http://tfwiki.net/wiki/The_Power_and_the_Glory . This issue reprints the whole of the 'Power and the glory' strip.
Script by Simon Furman, pencils by Manny Galan, inks by Jim Amash, colours by Chia-Chi Wang. editing by Rob Tokar, Chief editing by Tom DeFalco. 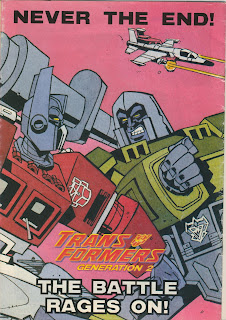 All in all then, 5 issues of which 2 were originated British material and 3 were straight reprint issues. And it only lasted 5 issues. So, not a great success all round then, but it's an interesting footnote in Fleetway's line of tie-in comics. Fortunately for them Sonic the comic was proving to be much more successful.
Posted by Richard Sheaf at 06:00