UPDATED: 'The secret of the samurai' - a Julius Chancer adventure 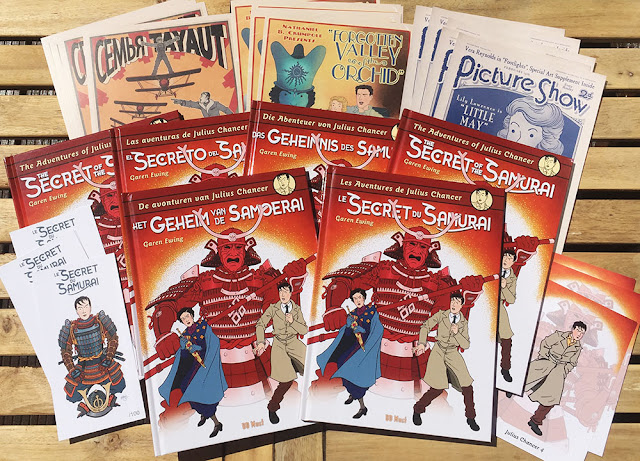 with the intriguing accompanying message...
I wasn't 100% sure this was happening, but a parcel just arrived from Brussels - 'Secret of the Samurai' in English, French, Dutch, German and Spanish
The strip was original published in 4 parts (with 5 pages a week) in The Phoenix comic back in 2013 so this will be a slim reprint volume but would still be a lovely addition to the shelf of any Rainbow Orchid fan (like myself).
Garen has now (here) provided some more details of this upcoming (yay!) project...let's see what he has to say...
Late last week I received a box from my Belgian/French publisher, BD Must, containing several copies of a new Julius Chancer album, plus a stack of bookplates and prints to sign. The Secret of the Samurai has a publication date of 27 August 2020 and will be available from the same publisher in English, French, German, Dutch and Spanish.

Is this a brand new story? No - this is the same story that was serialised in The Phoenix Comic back in 2013 (issues 75-78), though I have re-edited a bit of the text, and re-written and re-drawn large parts of two pages (pages 17 and 22 in the book).

Is this a full-length album? The actual Secret of the Samurai story is 20 pages long, but the album also contains two other short stories I wrote and drew (both of which have been published before): The Sword of Truth (2004, 6 pages) and The Girdle of Polly Hipple (2005, 4 pages). The album is 36 pages in total.

What is the book's availability? I'm not sure on this yet - as I write the album is not currently on the BD Must site. The French language edition is listed on Amazon. A crowdfunder for the French edition was successfully funded back in May on Ulule. I do know the print-run is not large, and that it's smaller for the English language edition. I will update this when I know more.

I'll end off on the other question I get all the time (and no, I'm not tired of it, it's lovely), Will there ever be a new Julius Chancer adventure? The answer to this is yes, as long as I don't get knocked down by a bus (or whatever the modern-day equivalent is ... an Amazon delivery robot?). I'm still very busy at the moment working on The Curious Expedition 2, but I haven't forgotten Julius Chancer - the new story is all-plotted, semi-scripted, and drawing started (extract below). I fully intend for this new story to happen ... I just don't want to promise when!