This is tonight - don't forget! 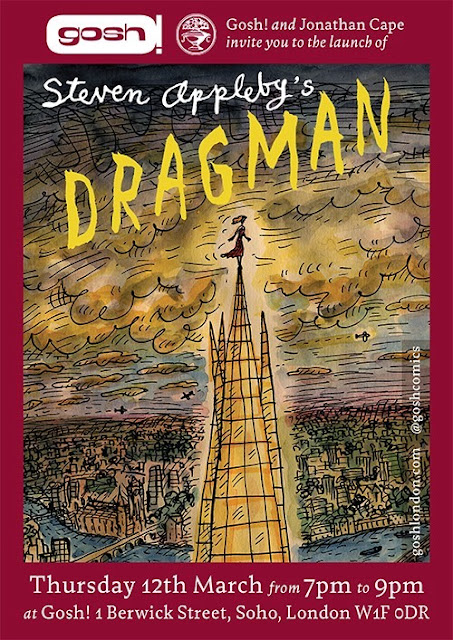 Let's see what they have to say about it all...

On Thursday 12th March 2020, we welcome the one and only Steven Appleby to the store to launch Dragman from Jonathan Cape. Steven will be joining us from 7-9pm to sign copies and chat.Dragman is Appleby’s debut original graphic novel and we are very excited to delve into this comedic and insightful twist on the superhero genre. Here’s what Jonathan Cape have to say:"A delightfully witty and exciting graphic novel by one of Britain’s favourite artists.Dragman tells the story of August Crimp, a man who has superpowers when he puts on women’s clothes. August loves wearing a dress but is deeply ashamed of his compulsion and terrified of rejection should it ever come out. So he tells no one. Not even his wife. But then one day a little girl falls from the rooftop café at the Art Museum and August has no choice but to fly and save her – an event witnessed by hundreds of people.And August Crimp’s life is never the same again.Dragman is Steven Appleby’s first long-form graphic thriller. Inspired by the superhero comics he read as a child and informed by his own secret life as a transvestite, Steven Appleby has created a multi-layered, tightly plotted, cleverly structured novel with a compulsive forward drive in which August battles greed, evil and his own self-doubt in a fight to save himself, his marriage – and the human soul. A real page-turner, Dragman brims with humanity, subtlety and wit – plus plenty of Steven Appleby’s oblique and absurdly imaginative musings on ‘what is life really all about?’Fans of Steven Appleby’s unmistakable drawing style, as seen in his many books and in comic strips such as Captain Star (NME, Observer), Small Birds Singing (The Times), and Loomus (Guardian), will not be disappointed."Come along and join us for this fantastic evening! Steven will be signing copies of Dragman on Thursday 12th March from 7-9pm. You can also pre-order signed copies of the book over on our web-store.