Friend of the blog Martin Baines has supplied me with these images from a toy tie-in comic from Tomy that as he says...
...here is the Z-Knights Toy line comic strip which I found whilst on holiday. They may have done another issue like this as it says its volume 2. It was the last new strip to appear in the New Eagle before it was cancelled
According to a Zoids wiki page (here) the backstory here is as follows...

The backstory details how, in the future, exploration of the galaxy has led to the discovery of a planet called Zi that is inhabited by metallic lifeforms. Some of the organisms were returned to Earth for experimentation, which led to the development of the Zoid-armor Titans, six huge semi-organic war machines. However, they caused such terrible damage when used in combat that use of the Titans was soon outlawed; the project was abandoned and the machines were sealed deep underground.
Many years into the future Earth has become heavily polluted, with smog having a detrimental effect on the planet's inhabitants. News that Earth is further threatened by an approaching meteorite results in Earth's social elite abandoning the planet to colonize Mars; anyone not rich or well-connected is left to die.
The meteor collides with Earth as predicted but instead of destroying life it actually restores the planet's atmosphere! Meanwhile, Mars is ravaged by a solar wind that reduces the artificial atmosphere by 40% and, jealous of the planet they left behind, the Mars colonists plot to return by force. Using scaled-down technology from the Titan project, the colonists (under the command of General Alfred Zeldan) manage to capture the space station Atlantis to use as their base of operations during their attack on Earth.
Aware that the nobles of Kilna would dispose of him after conquering Earth, Alfred order scientists under his command to bringing the 'Marine Kaizer' back into operation to use it as his trump card against Kilna's nobles afterward. Alfred send the Marine Kaizer to wiping out the Blue Star's Norther Knights at Northerland as MArine Kaizer's field test. However, the attack from Marine Kaizer accidentally awaken another titan sealed at Northerland, the Z-Knight. A young Earth lieutenant Bell Lance, who manage to control Z-Knight without system modification as his mother was a denizen of planet Zi. Successfully defeat the Marine Kaizer, Blue Star finally capable of counter Kilna's invasion by using the two titans to unlock their data and combine it with the smaller machine call Metal Foot. 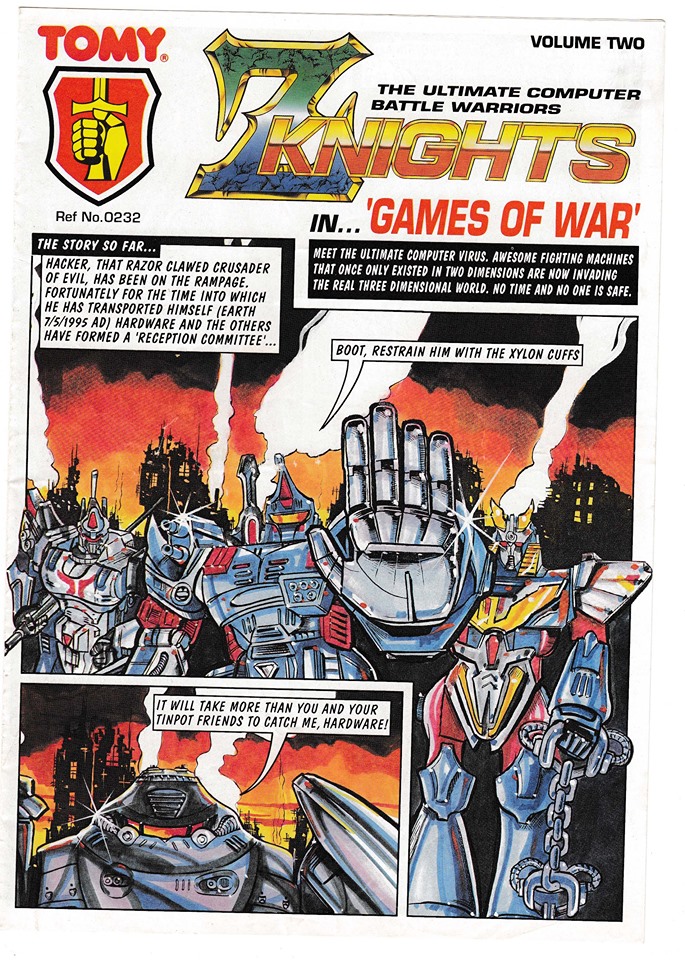 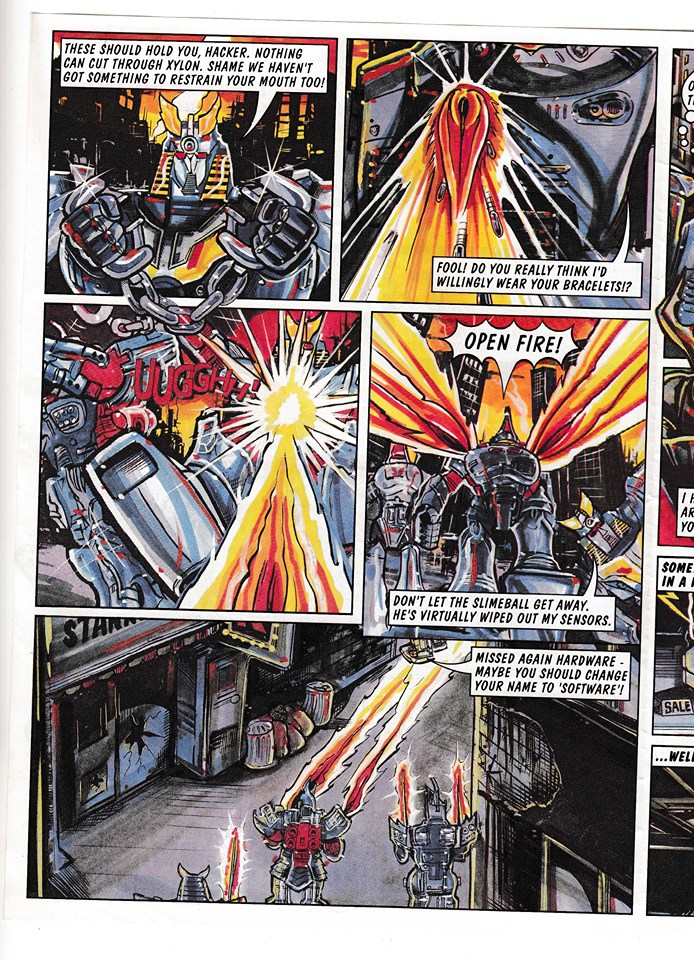 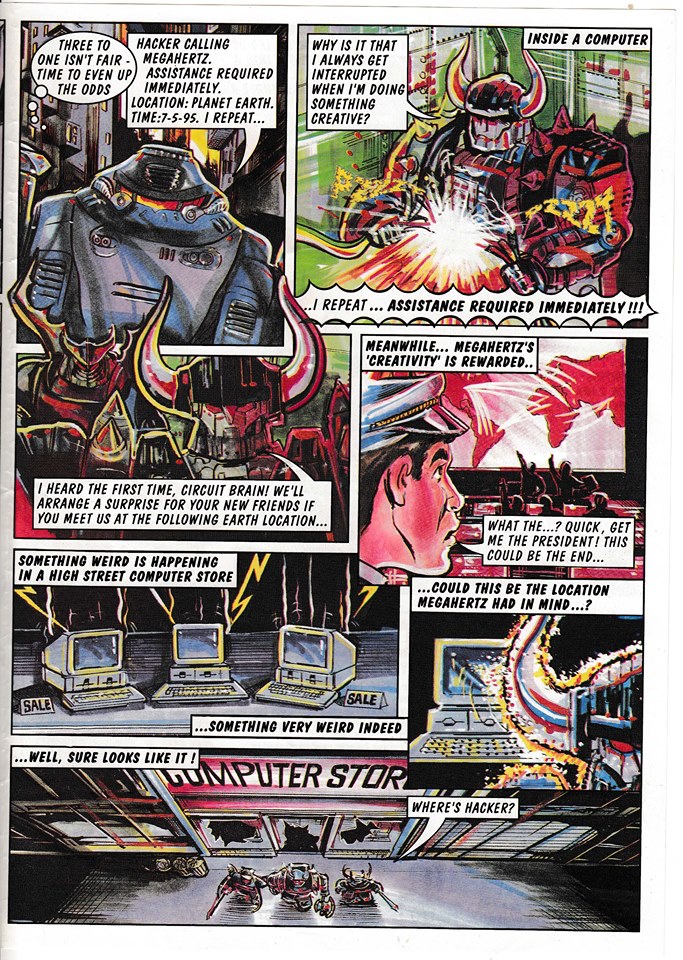 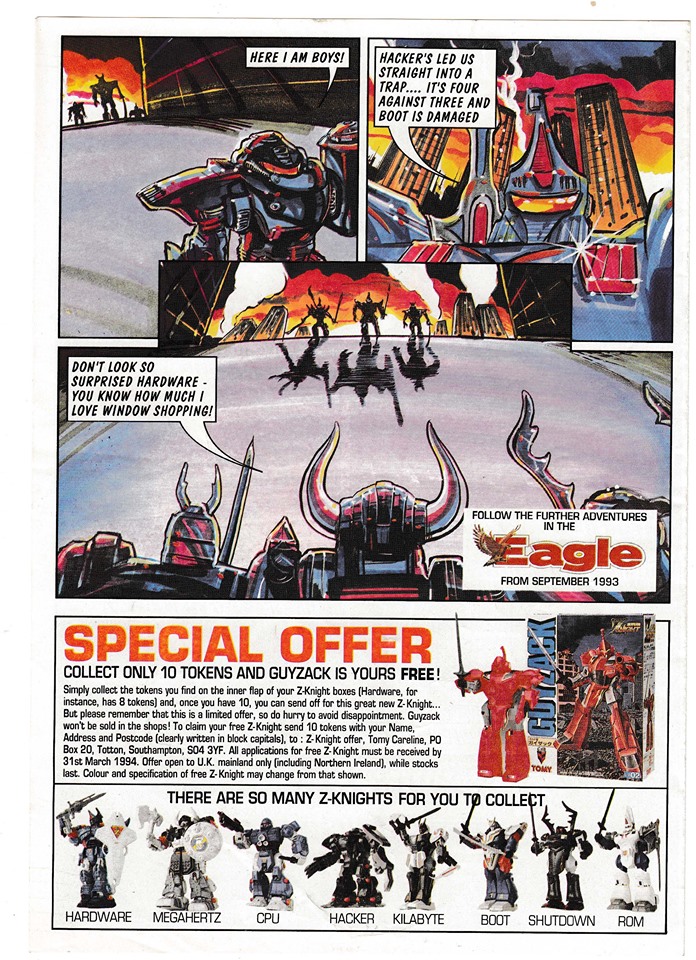 The Z-Knights were also released in Europe around the same time as Japan, under the same name. As stated in the article above, only a few, select models from the Japanese line were released in the European line. All of the models that were released in the line were renamed and recolored but had no design changes. There were also different sticker sheets to reflect the European version of the backstory.
The line was considered, "short lived" and only had 10 models in total that were produced. The European line was divided into 2 waves. The 1st wave having 8 different Z-Knights, (4 for each side) while the 2nd Wave only included two Z-Knights. (1 for each side) (See below) The models for the Second Wave were produced in lower numbers than the 1st wave, making them more rare.
The only exception to the European line was its version of the Guyzack. The 11th model in the line, the only way to obtain it was to mail in 10 tokens from the boxes of the other model kits. The model was not recolored or even renamed. In fact, it was a direct import from the Japanese line and even the box was the same. Both the Japanese and the European version of the model are exactly the same.
...and here's that September 1993 issue of new Eagle 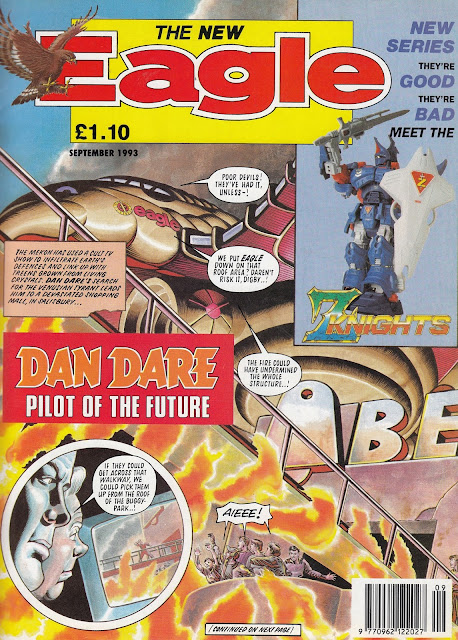 ...and here's the strip itself 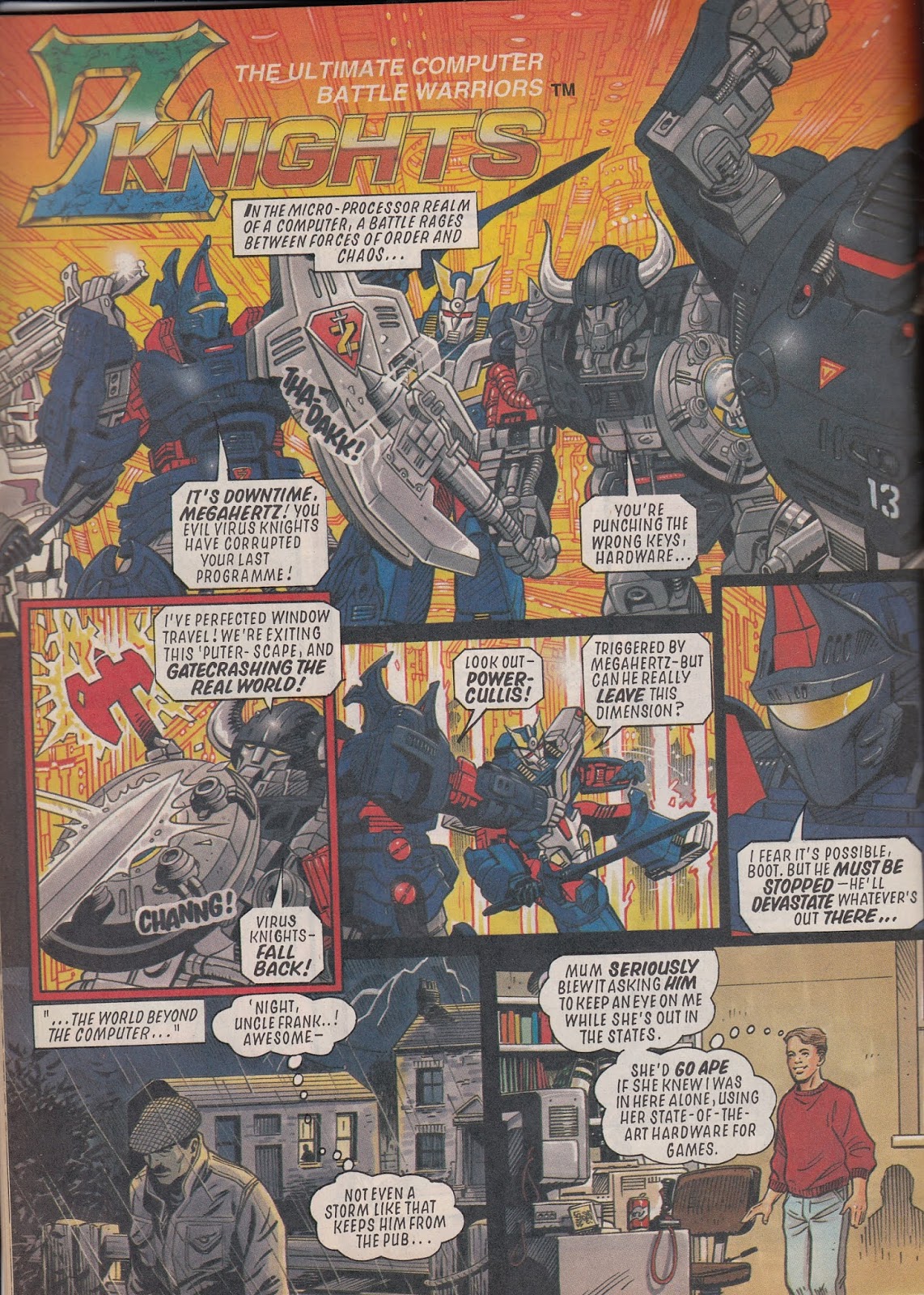 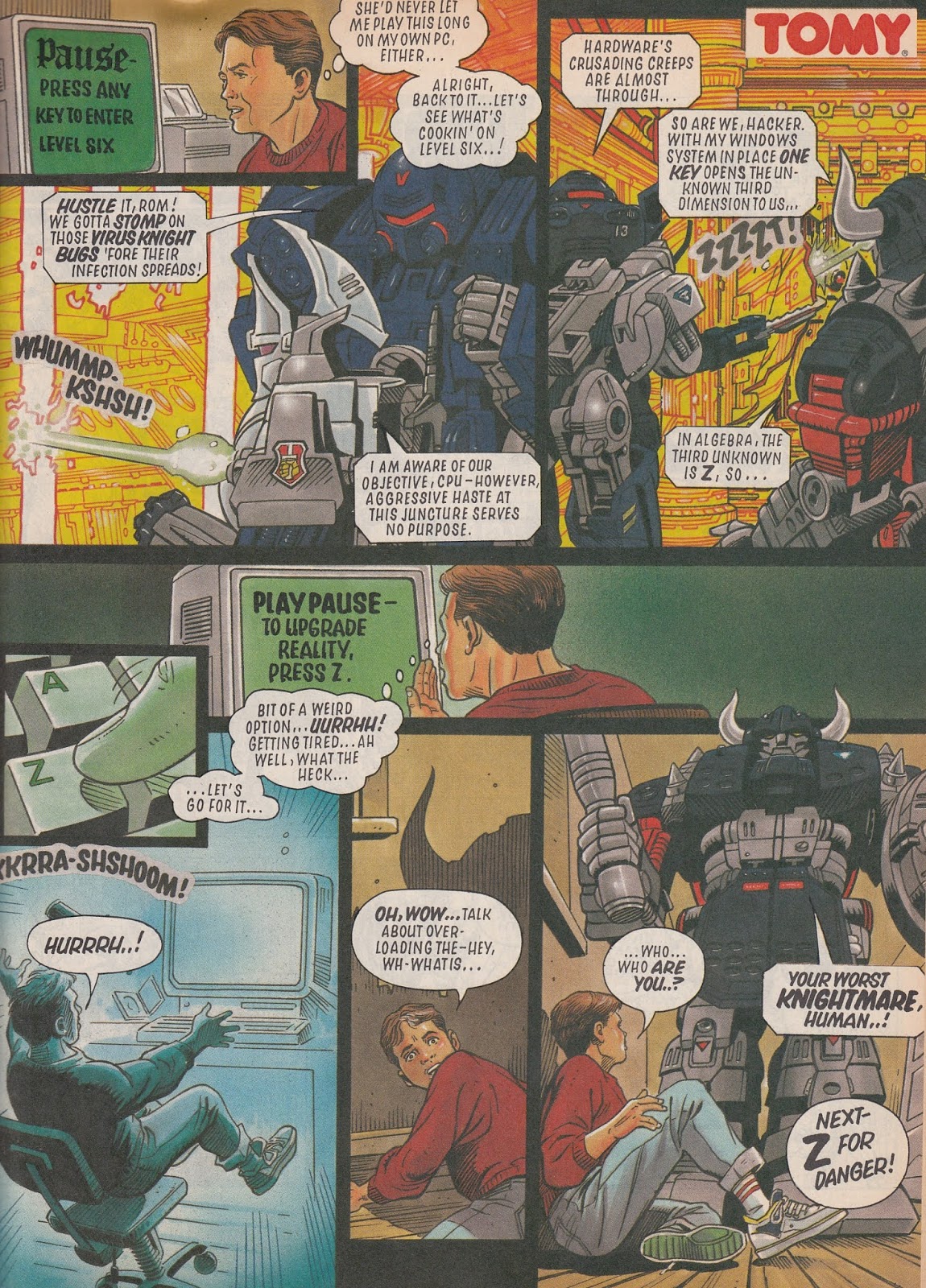 Z Knights appeared in the September, October, November, December 1993 and the (final) January 1994 issue.
Posted by Richard Sheaf at 06:48