I won't be at True Believers comic festival this weekend but I wanted to mark the event in some way - as luck would have it friend of the blog Rik Jackson was in town so we caught up...

'Heads - spiral of lies' - give us the elevator pitch
Three girls in giant animal heads are committing crimes all over London and private detective Steve Datsun is tearing himself apart finding out why. He’s just hunted down a client who was kidnapped by a sinister doom metal band who have been inciting mass suicides and is now determined track down La Trin, the underworld kingpin he believes is the golden thread to all of these despicable activities. While his police friend questions the recovered kidnap victim Datsun corners La Trin and discovers an unnatural surprise as all secrets prepare to be revealed.
It’s the forth issue in the Heads! mystery and the web of deception is spreading at an alarming rate. I’m currently writing issue five, which will close this story arc. 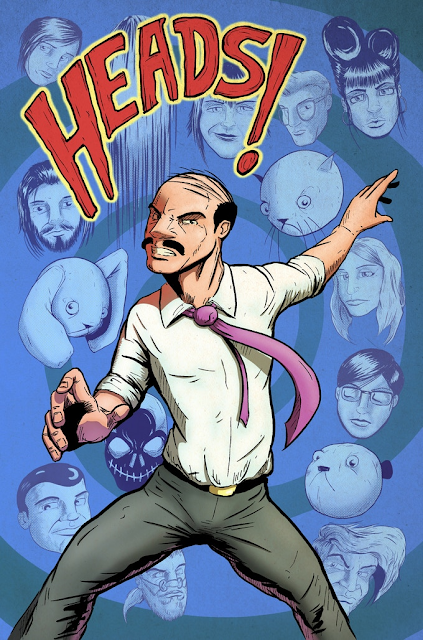 It's live on Kickstarter now - how's it doing?
It funded in the first 24 hour, so I’d say its doing pretty well! Each Heads! Kickstarter that I’ve run has set a new record for me one way or another. Issue three gave me my highest number of backers, which I’m very proud of as backer numbers climbing on a third issue is very rare. This time round I hit the target so quickly which totally took me by surprise. (you can back it here) 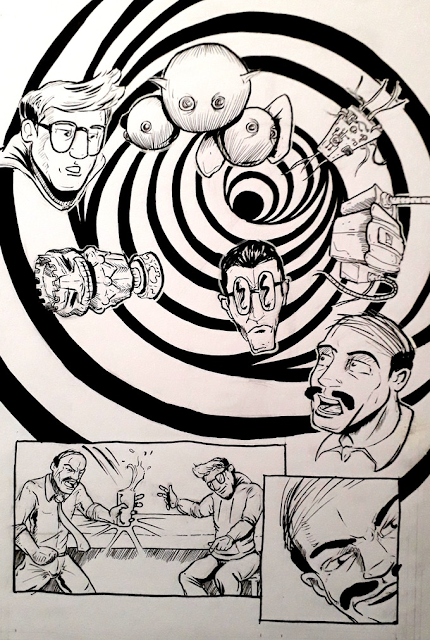 2019 was a busy year for you comics-wise - you put out, what was it, 3 comics? 4 comics? For anyone who's missed out on these what did you produce and where can people get them?
I actually released four books in 2019. Issues two and three of Heads! were released, sticking to my release schedule of getting an issue out every six months. I did my first ever Inktober this year and compiled the sketches into a book. I decided to do my own theme and went for horror icons, so I got to draw characters from my favourite horror movies, like Michael Myers, Killer Klowns from Outer Space and Critters. And I also released Three Panels Of What?! which is a mini comic collaboration with my son, Dylan. All of my comics are available from rikjackson.bigcartel.com 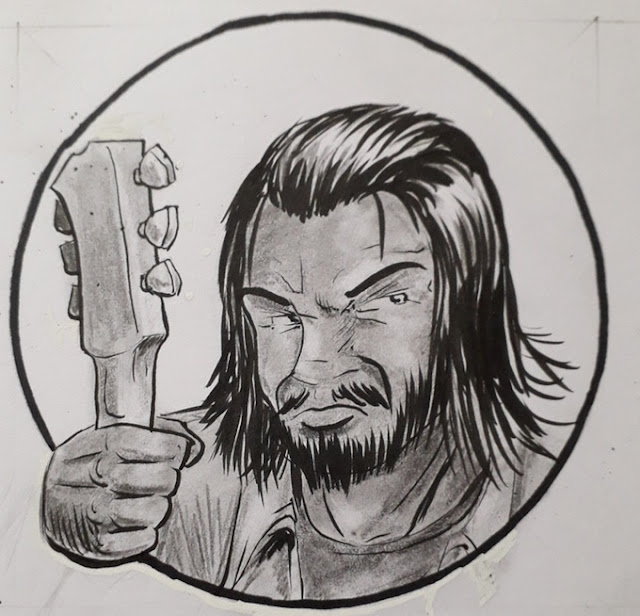 Do you have conventions that you're planning on attending this year?
I’ll be at NICE in Bedford this autumn and hope to return to BAM in Bath if they’ll have me (Rachael and the team curate the exhibitors to get a good range and rotation of talent). Both of these events were excellent experiences for me last year so I’m keen to get back to them. I’m planning on hitting an MCM or two. I have three kids so the longer comic cons are sometimes hard for me to get to, but maybe I can make a family weekend of it. 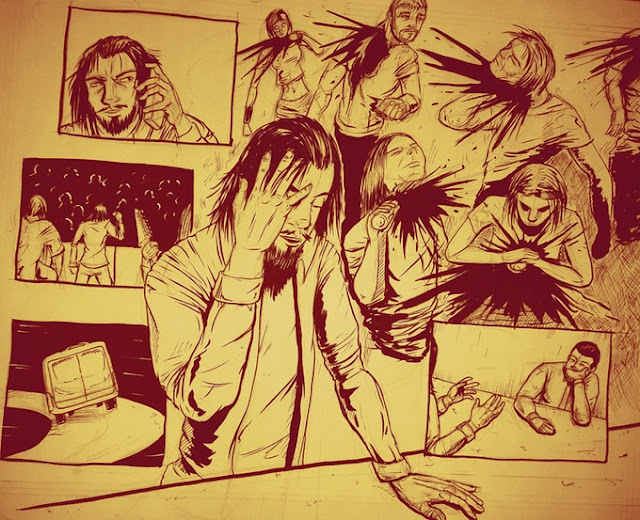 For anyone who backs this Kickstarter when do you expect issue 5 to be ready to go?
The plan is an issue every six months, so I’m aiming for August 2020 for the fifth and final issue of this story arc. It’s going to be a challenge though. When I released issue one I has nearly finished issue two, so I had a huge buffer to play in. But issue three was a beast and Spiral Of Lies has been an unexpected challenge too, so I’ve burned my buffer! But at NICE last year I promised punters I’d be back at the September 2020 event with the final issue, so I can’t let them down. 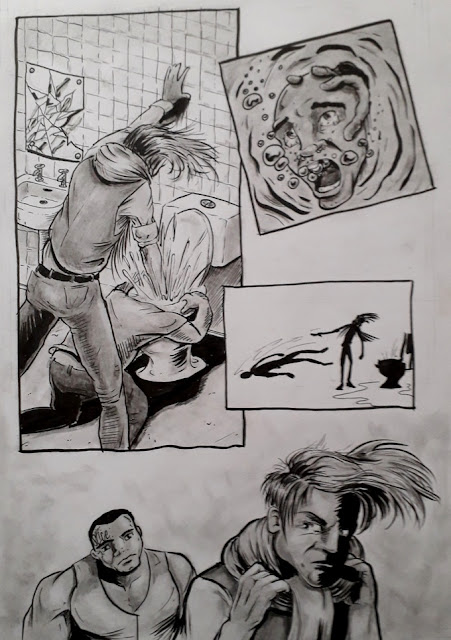 You contributed to 'The whore chronicles' anthology comic - any more plans to work with other collaborators this year?
That was such a great project to be part of. It was a very difficult piece to do. If you’ve read it you’ll know that most of us were asked to draw three pages of four panels which portrayed a working girl sitting in a chair speaking to camera. Sounds easy, but its actually very tricky to keep so much continuity while adding subtle changes to each panel as the story plays out. There’s some great artists in there and I’m humbled to have my name on such a talent-filled credit list.
I’m going to be continuing work on Unfortunate Tales, which is a horror webcomic strip published on the Attack From Planet B website. Site owner Ken Wynne writes them and I’m on art duties. He’s great to work with and it’s a brilliant art challenge for me. Because each strip riffs on a classic VHS horror movie its like getting a surprise commission to do every month!
My friend James Clarke is doing colour work on some Heads! pieces. He’s designed and coloured the comic cover, coloured the stretch goal print and is making me some promo images from my line art and concept pieces. He’s new to the comics scene and I hope to see him doing more comics colour work as the year plays out. I’m really impressed by his skills so will definitely be working with him on some new strips later this year. 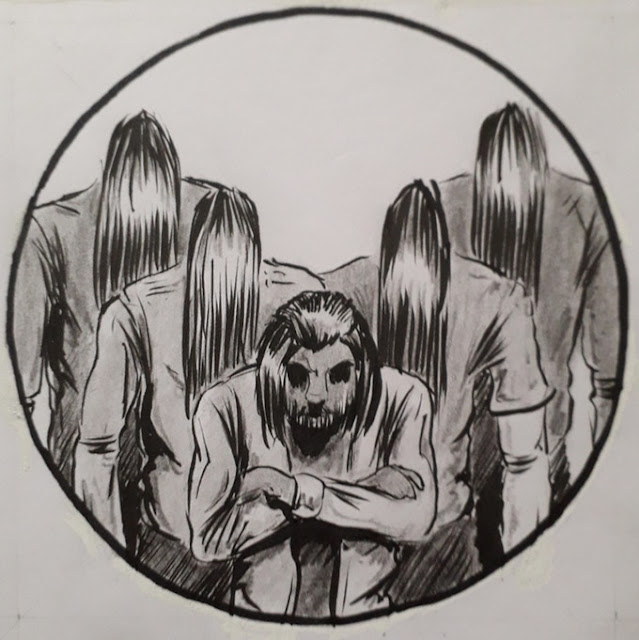 You've worked with your son on a couple of comics now - that a fairly unusual arrangement - how does that dynamic work?
Yeah, I suppose it is! Dylan is twelve years old and wanted to give comics writing a go. So we worked together on a four pager for last years Little Heroes Comics Anthology. He’d worked on play scripts at school but never a comic script, so we studied some comics to find a technique that worked for him. He actually dissected a Nick Prolix strip at one point by writing a script for it so he could get used what he needed to write to make a comic script work.
The idea for Three Panels Of What?! came about when we started setting each other three panel challenges at comic cons. Dylan helped table with me at most of my conventions in 2019. On the train journeys and in quiet moments at the events we challenged each other to come up with three panel comics. Dylan would write three panels of undirected dialogue which I had to interpret with images, then I would draw him three images that he would have to write dialogue for. The result is never what we expect and has a subversive humour to it which we’re really proud of. 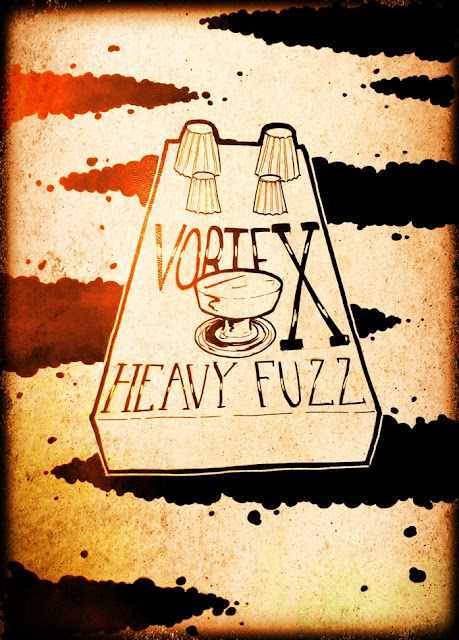 What Kickstarters are you currently backing or looking forward to?
I just backed Atomic Hercules by Tony Esmond and Adam Falp. What a great combo – those two are bound to come up with something insane! The 77 looks awesome as well, if you are into retro 2000AD style awesomeness. There’s a new Penned Guin collection running at the moment which is well worth a look, and in a slightly more mainstream arena I’m quite taken with Jimmy Palmiotti’s Creator Owned Heroes Collection.

You ca back 'Heads - Spiral of lies' right here, right now
Thanks for your time Rik!