Gosh comics have announced (here) a signing be Garth Ennis & PJ Holden of their new comic 'The stringbags'... 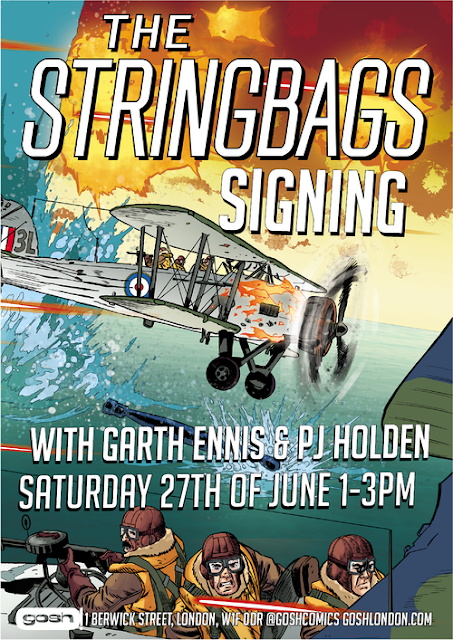 Let's see what Gosh comics have got to say about the signing...


Garth Ennis and PJ Holden are making their way to us for an in-store signing of their new comic, The Stringbags, on Saturday 27th June 2020 from 1-3pm.
Published by Dead Reckoning, The Stringbags follows the adventures of a Royal Navy crew flying the unfashionable and underrated biplane torpedo bomber, the Swordfish, inspired by true stories during World War II.
If you do the incredible often enough, they’ll want you to do the impossible.
Nazi Germany, Imperial Japan, and Fascist Italy began World War II with torpedo bombers that could devastate enemy warships and merchantmen at will. Britain’s Royal Navy squadrons went to war equipped with the Fairey Swordfish. A biplane torpedo bomber in an age of monoplanes, the Swordfish was underpowered and under-gunned; an obsolete museum piece, an embarrassment. Its crews fully expected to be shot from the skies. Instead, they flew the ancient “Stringbag” into legend.
Writer Garth Ennis and artist PJ Holden present the story of the men who crewed the Swordfish: from their triumphs against the Italian Fleet at Taranto and the mighty German battleship Bismarck in the Atlantic, to the deadly challenge of the Channel Dash in the bleak winter waters of their homeland. They lived as they flew, without a second to lose—and the greatest tributes to their courage would come from the enemy who strove to kill them.
Based on the true story of the Royal Navy’s Swordfish crews, The Stringbags is an epic tale of young men facing death in an aircraft almost out of time.
Garth and PJ will be signing copies of The Stringbags from 1-3pm on Saturday 27th June. Don’t miss this opportunity to catch these two comic legends! You can pre-order a signed copy of the book by clicking here if you are unable to make it to the signing.
Keep up to date with any news on our Facebook event page here.