There's a rare opportunity to bid for a copy of Action comic from 23rd October 1976. Considered by many to be the holy grail of British comic collecting this is the 2nd opportunity to acquire a rare copy of this comic in the last 6 months ! 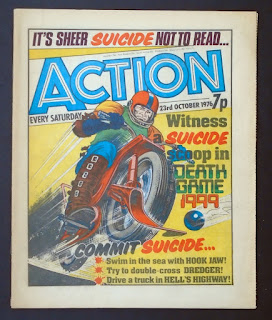 There's plenty of background on the issue itself (and the circumstance behind the previous copy to come up for sale here)
http://downthetubes.net/?p=22473

Email ThisBlogThis!Share to TwitterShare to FacebookShare to Pinterest
Labels: Action