From 1993 we have "Eastern promise" a 45 page Roy of the Rovers adventure. This story isn't set in Melchester but in Japan (so it's not one of those 'the Melchester plane has crash-landed in a small South American country and the team have to win 10 games of football before they can make it back to the England just before the season starts').


In fact here Roy takes the Melchester Rovers youth squad to Japan to represent England in a world youth cup.


The team on the front cover here don't make an appearance in the story inside! 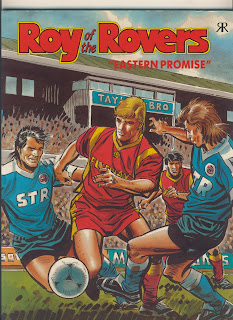 Art is by Barrie Mitchell
Posted by Richard Sheaf at 12:00

Email ThisBlogThis!Share to TwitterShare to FacebookShare to Pinterest
Labels: Ravette, Roy of the rovers