ok, so this isn't strictly speaking a new comic (but it does include new comics content) but this is the latest volume of Hibernia's 'Comic Archive' series. Here's what David MacDonald has to say about it...

On sale at last here at last, please share far and wide! http://www.comicsy.co.uk/hibernia/

The third in Hibernia's 'Comic Archive' series is here, taking a look at the dark underside of British comics with 'It's Ghastly, the untimely demise of Scream!'

Scream! comic appeared on the newsagents shelves for just 15 issues in 1984 but managed to leave a fearsome reputation behind. 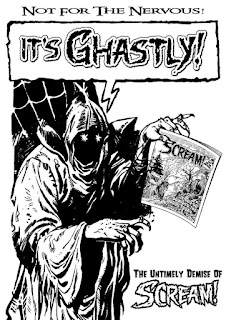 Featuring the work of, to name a few, John Wagner, Alan Grant, Simon Furman, Alan Moore, José Ortiz, Eric Bradbury and Brendan McCarthy, Scream has built up a cult following over the years, with back issues and Holiday specials now highly collectable.

Scream's sudden disappearance from the newsagents led to rumours of it being removed because of parents complaints, or being the victim of a strike.


'Its Ghastly' delves into the murky world of Scream with contributions from all of its editors, Barrie Tomlinson, Ian Rimmer and Simon Furman to uncover the truth of its demise.


Scream's six Holiday Specials come under scrutiny and uncovers the origins of such stories as 'Black Beth' and Dave Gibbons 'The Nightcomer' and also included is a cover recreation to issue 16, and the actual covers to 17,18, and 19.


The highlight is a complete 16 page Nightcomer's tale that was due to start probably in issue 18 of Scream but lay unpublished until now. Join Rick and Beth for one last supernatural adventure by Simon Furman and José Gonzales and much more in 'Its Ghastly', the ultimate Scream companion.


What are you waiting for? Go order it! I know I have.


Hibernia Comics can be found on facebook here...
https://www.facebook.com/HiberniaComics/?fref=ts
Posted by Richard Sheaf at 06:00