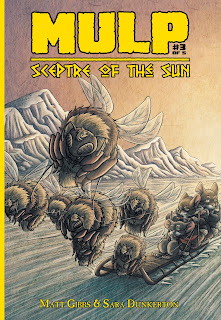 For anyone who's never come across Mulp, I can highly recommend it. The artwork is beautiful, the scenario great.


and there are some exclusive page to be found here
http://downthetubes.net/?p=34649

MULP is an anthropomorphic comic book, a Pulp adventure set in a world of mice, by Matt Gibbs & Sara Dunkerton.


The Sceptre of the Sun follows the exploits of Jack Redpath and Vicky Jones as they attempt to unravel a mystery surrounding an ancient stone tablet unearthed during an archaeological excavation in Egypt. This tablet is the first marker on an adventure that sees them racing around the world in search of a legendary treasure. Joined by their friends Cornelius Field, Prof. Walter Harvest-Scott, and Elisabeth Harvest-Scott, together they must prevent a powerful artefact falling into unscrupulous paws.


Suitable for all ages, MULP: The Sceptre of the Sun is being published in five parts, beginning with the first in 2014.


Matt Gibbs is a freelance writer and editor. Represented by the Sidelines Agency for games writing and narrative design, he has worked on titles such as Creative Assembly’s Total War: ROME II, Sega’s Binary Domain, and Ubisoft Reflections’ Driver San Francisco. Alongside games, he is the managing editor of Improper Books and collaborates with a number of talented artists on creator-owned comic and graphic novel projects. Originally an archaeologist, he spent several years grubbing about in holes before turning to writing as a career.
Website: mattgibbs.net
Twitter: @matthewgibbs


Sara Dunkerton is an Illustration graduate living and working in Bristol. Her debut as a comics artist was collaborating with Matt Gibbs on a short story for the BAYOU ARCANA: SONGS OF LOSS AND REDEMPTION anthology. Since then she has illustrated comics for DARK HARVEST: RESISTANCE, SUGAR GLIDER STORIES, and INTO THE WOODS: A FAIRY TALE ANTHOLOGY, as well as working on various projects and commissions. She lives with her pet rats who have become a source of inspiration for MULP: SCEPTRE OF THE SUN.
Website: saradunkerton.blogspot.co.ukTwitter: @SaraDunkerton


Jim Campbell is an Eagle Award-nominated letterer whose work can be seen in titles from Classical Comics, Dark Horse, Image, Markosia, Renegade Arts, Timebomb and Zenescope. He lives and works in darkest Nottinghamshire and maintains a blog on matters relating to comics, lettering and other random musings.
Website: jimcampbell-­lettering.co.uk
Twitter: @CampbellLetters


Improper Books is a comic and book publishing studio focusing on creator-owned stories that have a touch of the fairy tale, the fantastical, or the otherworldly.
Website: improperbooks.com
Twitter: @ImproperBooks
Posted by Richard Sheaf at 12:19