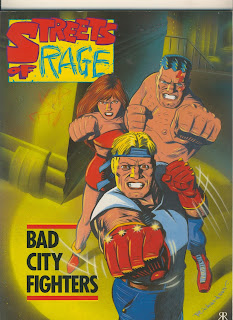 with a cover adapted from issue 7 of Sonic the Comic [STC], yes, it's Streets of rage - bad city fighters. 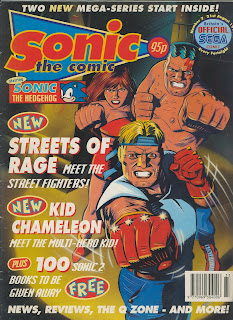 Streets of Rage initially ran from issue 7-12 of STC and it's those 6 issues that are reprinted here. To be honest I'm not sure what this story is doing in the pages of Sonic.
According to
https://en.wikipedia.org/wiki/Streets_of_Rage
The story (in which Axel, Blaze, and Max quit the highly corrupt police force to do more good as vigilantes, taking down Max's ex-partner, the crime lord and martial artist Hawk) is based on the video game Streets of Rage 2.


Really this is so much more violent than anything that ever featured that blue hedgehog, well worth picking up. On the other hand, this is quite hard to find, laughably, Bookfinder.com have 4 copies listed all at just under $1000 (each, obviously). Happy hunting!