Theme 'week' will be Alix

So who's Alix then?
Well if you are familiar with European comics then he probably needs no introduction as he has been having adventures in the Roman empire for the last 50 years. I'm a huge fan of the ligne claire [clear line] style of European comics illustration, this style was popularised by Hergé in his Tintin stories and has been extremely influential.


There are more detail on Alix and his adventures here:


Tintin's adventures first appeared in the (original) Eagle magazine in 1951 with an adaptation of King Ottokar's sceptre. Asterix, on the other hand, had to wait until 1963 to be published in the UK (in Valiant). Both series went on to become well-established and extremely popular and still fill bookshelves up and down the country today.


So, if these two series worked then why not launch another series in the UK? One that mixes the adventure of Tintin with the setting of Asterix, what could go wrong? 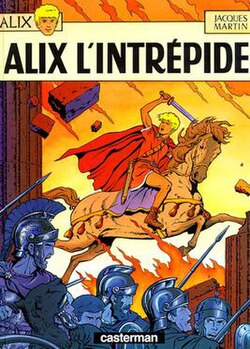