I’ve been a reader of the magazine of the Jeff Hawke club, Jeff Hawke’s Cosmos, ever since its launch nearly 20 years ago (yikes!). With a title like “The epilogue” it is perhaps not a surprise that this new publication marks the end of the Jeff Hawke strip. It’s not the end of publications from the club (more on that in a bit) but there is no longer a ‘regular’ magazine being produced. 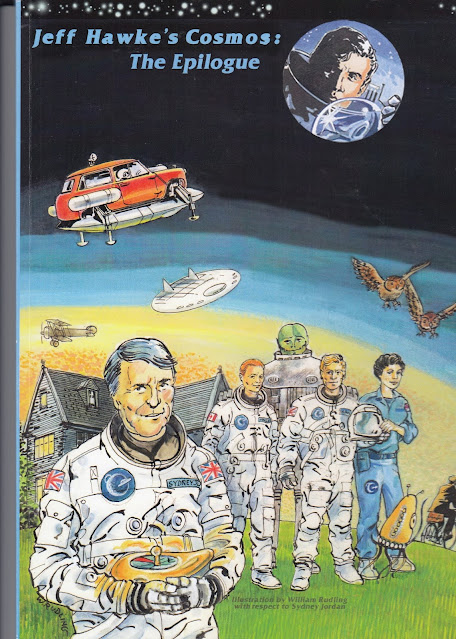 Back to The Epilogue though. At over 150 A4 pages it’s a bumper issue. As ever there are a number of complete stories – in this case A message for Medusa, Times Jest!, Out of the ecliptic and the few episodes of the final story, Song for Methuselah, that were published before the strip was ignominiously cancelled. Full colour covers are by editor William Rudling. There are a number of smaller articles that, and I mean this in a positive way, have the feeling of having been taken from the “...this must get published before we run out of issues to publish stuff in” folder. So we have Sydney Jordan with his fleeting memoir of Fleet Street; Sydney talking to Chris Tubb; the final count-up of the number of strips; guest appearances in the strip; a history of the club; a look at those that have contributed so much to the club and more besides. This is all in addition to the usual features The sky above you and the most detailed set of notes about a comic strip that you’ll ever read – the inimitable Hawke’s notes by Duncan Lunan. A really interesting selection of articles and some rare vintage photos too – all the sort of stuff I love!
It seems unlikely that anyone will be coming to the strip ‘cold’ at this point and in some ways I’d advise you not to. As much as possible Cosmos has tried to publish the stories in chronological order so these strips here are in some ways NOT where I’d recommend starting. I’d really recommend going back to the beginning (via those two Titan books reprints perhaps) and ‘dipping your toes in the water’ there and if you like what you read then come back to Cosmos for more. Lots more. 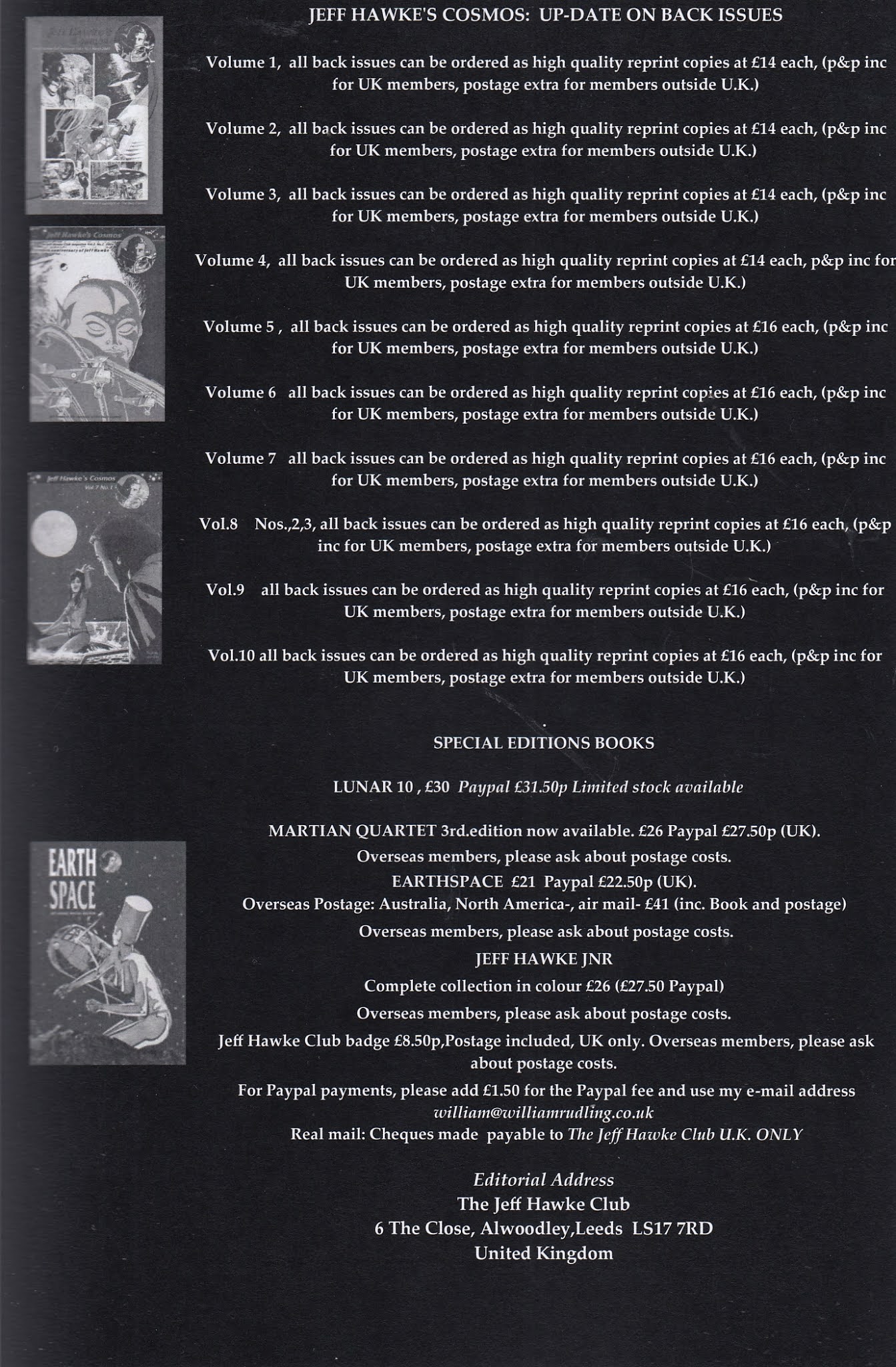 In fact you might want to come back for the next Cosmos publication – Devil’s advocate. This will feature all the strips which are introduced by the Devil along with an entire index of Jeff Hawke stories all cross-references to the Cosmos issues. Look out for this in 2021. The art style in these classic stories is much more detailed and much more my cup of tea than the stories in Epilogue (and other later issues of Cosmos) which definitely feature some gratuitous images of the lead female character and her skintight jumpsuit. Anyway, don’t let that put you off, Jeff Hawke is an intelligent SF story with incredible plots fitted, somehow, into three panels a day in a national newspaper. I doubt we will see the like again. It’s been a pleasure spending 20 years getting to know Jeff Hawke and William Rudling is to be congratulated on bringing the complete Jeff Hawke canon to us all – without him there would just be those 2 Titan Books reprints.
There are also (in colour) some prints, see below, that Sydney has drawn – again, contact the editorial office for more details.
You can contact the club via:
Editorial Office
The Jeff Hawke Club
6 The Close
Alwoodley
Leeds
LS17 7RD
United Kingdom

William@williamrudling.co.uk
There is a one-off entry fee to join the club of £2.50
Back issues are available via the above addresses
There are also other volumes available - Lunar 10, Martian quartet and Jeff Hawke jnr
You can also purchase original Jeff Hawke direct from Sydney Jordan himself – again details are in the magazines.
Full disclosure – I received a free copy of ‘The Epilogue’ to review