British comics swpameet is coming this autumn - see you there?

A date for all our diaries this autumn (!), Saturday 28th September, when 'The battle of the bulging wallets' British comics swapmeet makes its debut down South, I recently caught up with organiser Bruce Scott to ask him all about this event... 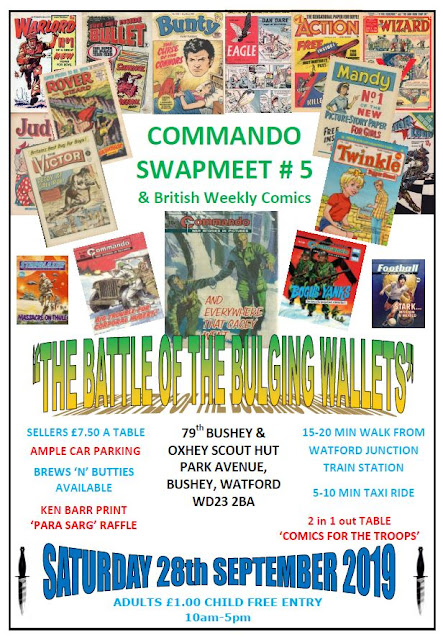 The comic meet up with the best name in 2019 is happening on Saturday 28th September, what can you tell us about it?
Ha ha, thank you Richard for that, you’ve put a smile on my faceJ. Commando Swapmeet #5 & other British Comics “the Battle of the Bulging wallets”... in the famous words said in the war film “Where Eagles Dare” is a “GREEN ON GO”...with Swapmeet #4 only 6 weeks away (Saturday 23rd March 2019) in Newcastle Under Lyme, Andy Yates’s inbox must be so full, filling up with enquiries from buyers and sellers daily. I thought it was time to do my bit and get up and running with the announcement that #5 was going to be held in Watford, and so far I’ve had a positive response to the initial advertisement. SwapMeet #5’s aim is to reach out to fellow collectors in the South East, the advantage of it being held in Watford, it’s only a 20 minute train journey from London Euston to Watford Junction, then a 10-15 minute walk to the venue. If travelling by car, just off the M1 & M25, there is ample free parking outside the Scout hut and the public roads nearby.


Where did I get my title from? I actually thought about it when I was travelling back down south from SwapMeet #2, and I got caught up in the snow; it reminded me of the “Battle of the Bulge”. I was lucky, the weather was behind me...but the snow was in front of Stephen Hume as he was driving the Scottish contingent back up “North of the wall” in treacherous conditions, they had a few hairy moments but arrived safely albeit 8 hours later.


When I got home, I wrote the title down in my comic file; waiting for the day when I could use it...that day is Saturday 28th September 2019.


I think the easiest way to describe the Swapmeet is “the gathering of like minded collectors of Classic British comics”. Sellers and buyers use the Swapmeets to “move on their doubles, find comics they need, make lasting friendships and possibly meet artists and writers who have contributed to iconic memories of our youth”. It’s not about making thousands of pounds; somebody may have the 3 Warlord comics you need to finish your collection and you could pick them up for a £1.00!!! It’s about passing on swaps lists and wants lists, helping each other complete collections quicker and not at certain selling websites prices. For me it’s Commando...84 to complete the full run, so my hunt continues!! 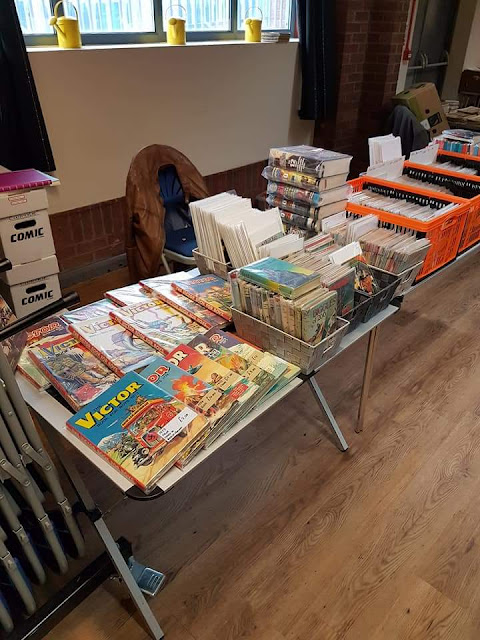 Will it just be Commando comics or will there be other comics there?
Commando is just 1 in a 1000 different comics that end up at the Swapmeets, and it’s because of the SwapMeet’s that my own and other collectors collections have expanded. 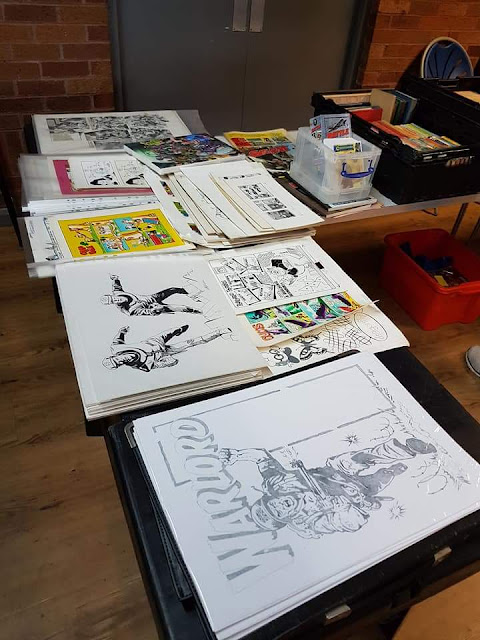 What's the '2 in 1 out table for the troops'?
The '2 in 1 out table for the troops' idea was first done at SwapMeet #3, the idea is that buyers or sellers contribute “2 comics onto the table and take 1 out” once the SwapMeet is finished, the count is done and then the packing starts so that they can be sent out to our “guys ‘n’ gals” serving overseas.


A sort of “red cross parcel” except instead of shower gel and toothpaste, each box contains around a dozen comics and a letter from the contributors at the Swapmeet.


SwapMeet #3 collected just over 600 comics which were sent out and received by troops in Bosnia.


SwapMeet #5 will also see a new thing...we are introducing a raffle. The prize being a framed ‘Para Sarg’ print by Ken Barr, even though I already have one, I will certainly be paying my £5 for a raffle ticket. All of the proceeds from this will go to the Scouts. 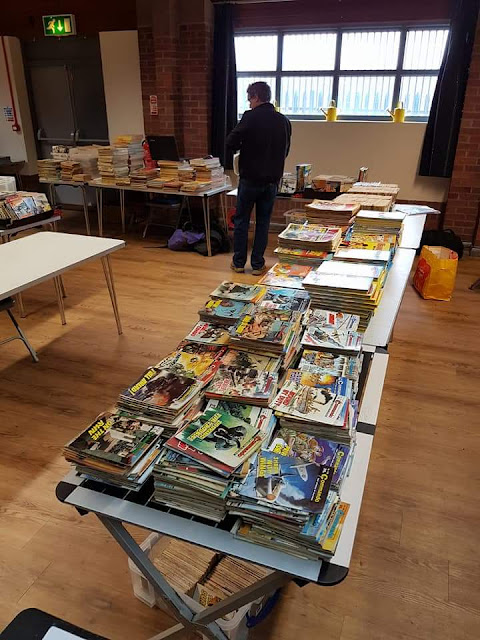 Are seller tables still available? What time can people set up from?
Sellers’ tables are available, we have the capacity for around 10-15 sellers (already there has been 5 confirmed, and 3 consulting their diaries...or should I say “consulting the wife!” so we are looking for some more budding sellers, don’t be shy get in contact but it’s not all about the sellers, the message needs to be spread far and wide. It always seems daunting at first, meeting fellow collectors and sellers, but there is nothing to be afraid of, everybody that attends all share the same passion...Classic British comics, so there is always something to talk about.


Everybody has very reasonable prices and you won’t go away disappointed. We are opening the front door to the general public at 10:00 and will go on through till 17:00, and I will have no doubt that it will extend...I will be onsite from 06:00, got to get the Berco boilers on!!! Access for sellers can be from that time, allowing them to set up their 6ft table, which are supplied. Cost for a table is £7.50 for the day; there will be a tea/coffee stall all day and bacon butties available for those that want one. All of the proceeds made will go to the Scout Group for the use of the hall. 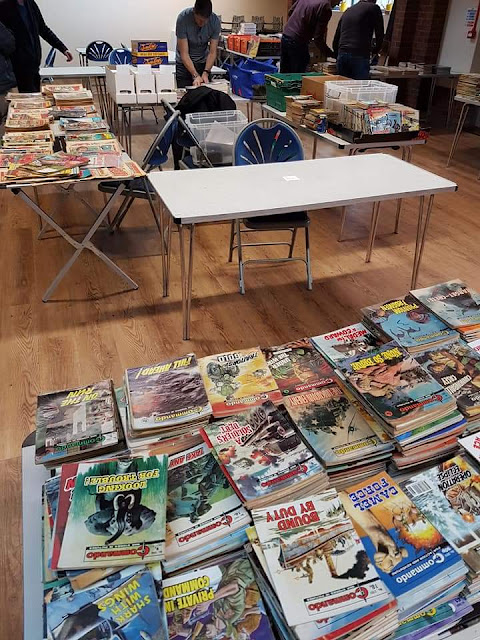 This is billed as Swapmeet #5 - what were Swapmeet #1-#4? Did you go to them?  What are the Swapmeets about?
The initial conception of the Swapmeet was created by Andy Yates from Newcastle-under-Lyme. Andy has a great collection of comics, but he like a lot of collectors out there had thousands of doubles, and he came up with the idea of holding a Swapmeet with like minded people, all collectors and take it from there...September 2017, the Swapmeets were born, It was a success and 6 months later in March 2018, SwapMeet #2 was held, this time a few more sellers came, again a success.


SwapMeet#3 (Sep 1'8) was hosted in Lochore, Scotland by Colin Noble, this was our first 2 day event, long but worth it, along with new and old sellers from SwapMeet #2, we were also joined by 3 Commando cover artists, Stephen White, Graeme Neil Reid & Mr Ian Kennedy, we were also joined by Jeremy Briggs of Downthetubes & former DC Thomson Editor Calum Laird, all of them as collectors!!!  SwapMeet#4 as I said earlier is being held in Newcastle-under-Lyme, with Andy again steering the ship.


There are actually only 3 who have attended all from the original SwapMeet, Andy Yates, Stephen Hume from Glasgow and myself, we jokingly call ourselves the “old brigade” and speak to each other daily, great friends. Both Andy & Stephen are travelling to Watford SwapMeet with their wares, so there is definitely no excuse about travelling!! 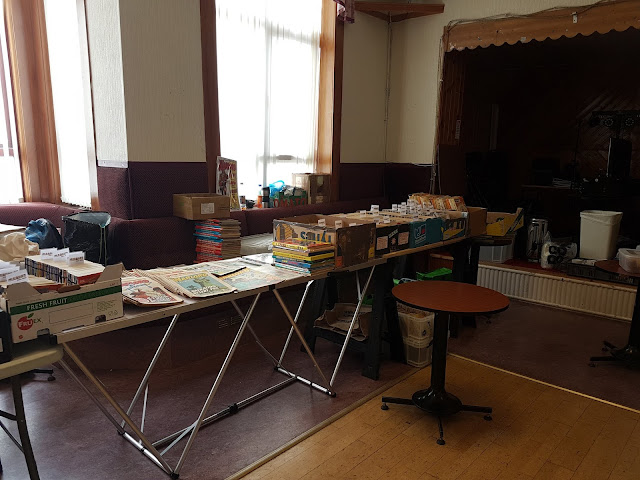 This is a fan event rather than a big MCM style event - how did it come about initially?
Everybody is a fan of a comic, I would be astounded if someone said to me that “they have never glanced at or picked up a comic”. There are so many comics that have disappeared off the shelves in local newsagents and high street retailers, which is such a shame. I learned how to speak “Jerry” thanks to the likes of Warlord and Victor. Didn’t do me any favours in my German exams at school, but I still remember “Achtung, Donner und blitzen, Schnell and Gott in Himmell”


So I definitely don’t deserve any credit, that entirely belongs to Andy Yates, it was his idea, it was his conception, all we do as collectors is support him by attending and each other in our hunt to complete our collections. Andy created the Facebook page “Commando and British Weekly Comics - Collectors and Swaps Page” and as I type this article “Andy’s Army” now numbers 258 members from all over the world and it is active everyday with collectors’ PM each other on sealing a deal on an elusive comic they have been after.


But it’s also not just about the buyers and sellers, it’s also about introducing these classics to the next generation, that is why we encourage visitors to bring the children, there are comics for all. My own daughter looks on in delight when she sees my collection...new car when I end up selling it all...lol.


Could it get bigger? Well if there is a demand, then I think it could, but like everything it would cost money and time. We try and hold 2 events a year, traditionally March is Newcastle-under-Lyme, and September is elsewhere in the country. Glasgow has been spoken about and is in its early planning stages. We would love to do one in Wales. Could we ramp it up to 3 a year? Who knows? But you can overkill things... 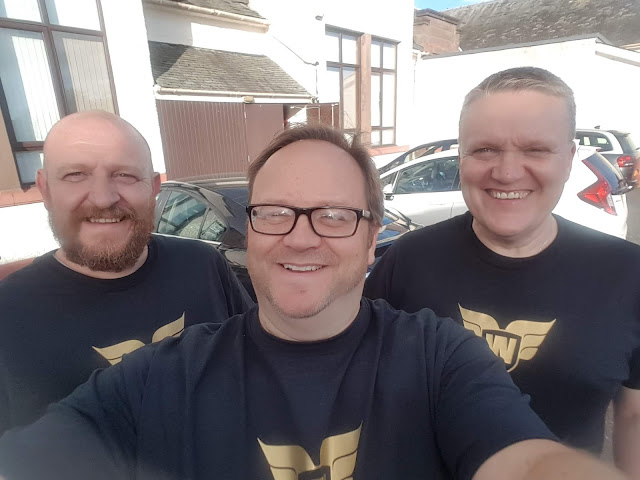 
Who would you really like to get to this, or future, Swapmeets? Writers? Artists? Editors? Anyone in particular?
Richard, out of all the questions you have asked, this has to be the hardest for me to answer, if I could get David Tennant to turn up in his blue box with its flashing light and woosh woosh sound effect, I would be giving him my huge list (I do actually have an exhaustive list) of artists, writers and anybody who makes a contribution to our Great British Classic Comics, I would love them all to make an appearance, then I would be a happy collector.


Below is my list of who I would love to appear, but my list will be different to a lot of your readers, and I’m afraid that some of these fantastic contributors are sadly no longer with us...if only the Tardis was real!!! I’d be happy if David made an appearance at the Glasgow SwapMeet when it is planned, I also know a collector from his home town that would also be happy...

To all your readers, I’d just like to finish with...”come along, it’s a day out”.

Well that all sounds fantastic - I'll be there with a table full of doubles so come along!