Heads - into the Vortex

Heads! Into the vortex is the new comic from comic artist, writer, convention organiser and all round comics enthusiast Rik Jackson (@gojacksongo). I've known Rik since he organised the Wimbledon Comics art festival and loved his last comic 'Heads' so when I heard the next issue was coming to Kickstarter (here) I had to check it out and share it here.. 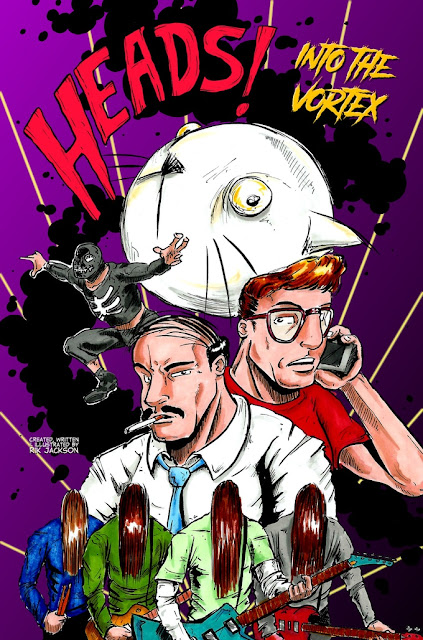 The target is a very modest £150 to allow Rik to print the first 50 copies (plus some cool badges, natch) 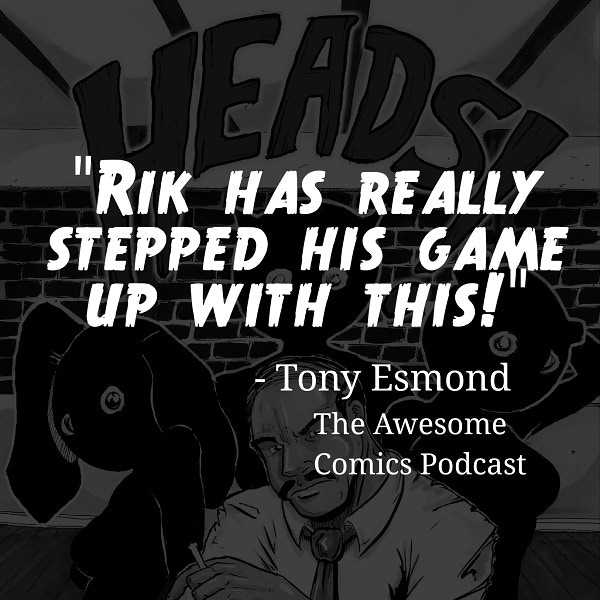 The reward tiers are pretty straightforward and the entry price for a printed copy of a comic is £3 (plus postage) - £3! That's less than I paid for a copy of League of Extraordinary Gentlemen the other day! Too many Kickstarters have a really high price for a simple physical copy of the comic so £3 is a great entry price for a 36 page (black and white) comic. It's here by the way 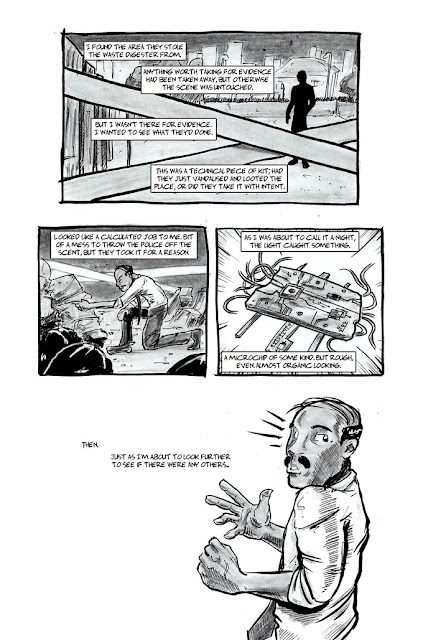 Anyway, what happens in this fine comic I hear you ask?

In the second outing of the Heads! universe, Datsun becomes embroiled in the mysterious and seedy underworld surrounding a metal band who have kidnapped a young man. Shrouded in myth and rumour, Vortex Face are renowned for shows which end in death and mutilation. Has their victim already become a corpse, or is he being brainwashed to join the band and help them carry out their murderous plot?
All the while, Datsun and his partner Higgins are on the tail of the elusive Heads! gang. Three girls in oversized animal heads are pulling off heists across London to steal the most obscure items, including a methane producing waste digester and an indeginous staue on loan from the British Museum. The truth under their masks is alluding Datsun, but that is the least of his worries. A muscle bound, skull faced murderer is on the loose and could well be protecting the Heads! gang to aid their dasterdly cause.
Can Datsun find the missing man, stop Vortex Face before they kill again and escape the clutches of this skeleton-masked thug? Are the Heads! gang behind it all? Find out now!
Try before you buy - There is an eight page preview of Heads! on my website that you can read for FREE. 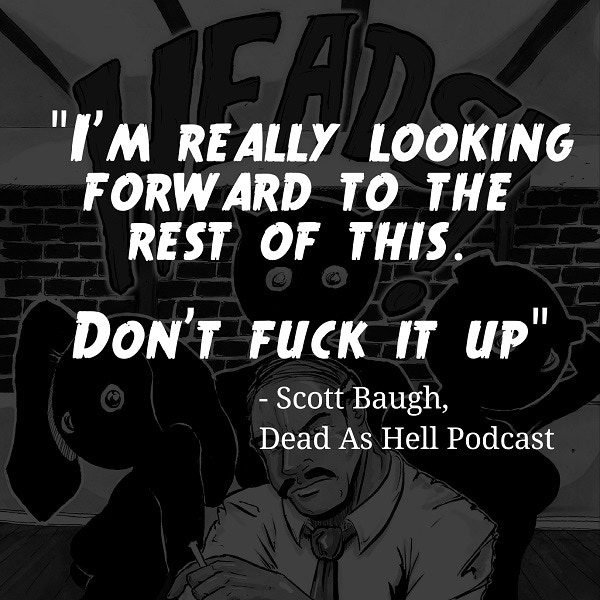 I recently caught up with Rik...

Ok, so for anyone who hasn't come across your work before this is what, your 3rd comic? Bring us up to date on your earlier work
Heads! Into The Vortex is the second comic in the Heads! series. The first book introduces private investigator Steve Datsun and the notorious Heads! gang; a group of girls with oversized animal heads who are pulling off unusual heists across London. Into The Vortex follows Datsun in his investigations but focuses on a related new case about a villainous metal band called Vortex Face. These
guys first appeared in Rock In Purgatory, my other comic. Rock In Purgatory is a heavy metal horror comic where I kill off fictional rock stars in outrageous comedy style. It’s full of dark humour and tons of exciting characters with loads of potential. Vortex Face were the band I felt would be great to start building on, so I brought them into the Heads! universe. 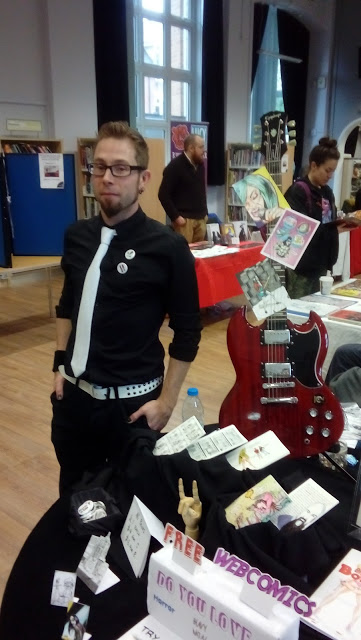 You got some great feedback for Heads #1 - tell us about that and what sort of feedback you got?

I was really blown away by the reaction to it. The people who’ve picked it up loved the black and white noir style and it seems that the London slang is going down a storm in the States – phrases like ‘toerag’ and ‘have a butchers’ appear to be firm favourites! The two things that have really puffed my chest out with pride have been comments on my art levelling up and my storytelling working
well. The longest piece I’ve written previously was twelve pages, so this is my first crack at a long form series. Hearing that I’ve written a great first issue has been a real confidence boost, and I’m aiming to make each subsequent comic better and better.


How long has it taken for you to create Heads into the vortex...how long to write? How long to draw?
I had the idea back in 2016, tinkered with it a bit and then left it to ferment. I’m glad I did, because when I dived into it properly the plot had matured and my art style had improved. When it comes to each issue, I am trying to get them done quickly so I can put them out fairly regularly – ideally three books a year if I can pull it off. I draw it all at actual size, which means I can take pages with me and draw whenever and wherever I like. I write and draw simultaneously; kind of a one-man-Marvel-method. I know the scenes and outcome for the issue and roughly plan it out. Then I start drawing and scripting at the same time, tweaking images to fit the script and the script when I decide on images that have better
storytelling or look more dynamic. If I don’t have any commissions to do, I can write and draw an issue of Heads! in about three months. Lettering takes me ages though, so I do that in bits and bobs while I start the next issue. 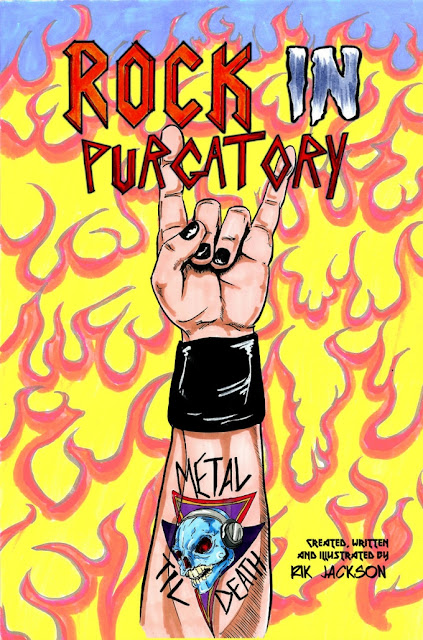 You're going to ICECOMICON in March - I think this is your 2nd con? What can people expect from you at a convention? Badges? Sketches?
I can’t wait for ICE! I missed out on the last Brighton edition and this one has people like David Broughton and Rachael Smith in attendance so it’s going to be great. I’ve done True Believers, Watford ComicCon and MCM London, as well as running and tabling at Wimbledon Comic Art Festival, so this will actually be

my fifth convention. I’ll have copies of Heads! and a re-print of the sold out Rock In Purgatory, plus prints and original art on the day. I like my table to be a bit different so I’ll be bringing my guitar along for the RIP display and I also made models of the Heads! gang to help promote it.

Have I imagined a Heads cosplayer from MCM? There was definitely a fan...so how did you find your first experience of a BIG con?
That’ll be those models – I was snapping photos of them all weekend! MCM was great. They don’t get much bigger than that in sheer scale but its fantastic to see such a huge section dedicated to indie comics. It’s a tough one to get your head around though, as there are so many people who don’t come near it. But once you
accept that some people come exclusively for certain other things then it’s easier to handle. The volume of people is a blessing and a curse. At smaller events you may get less people but there's a much higher percentage of them who are willing to stop and chat, even if they don’t buy your comic. As long as people have a look, if they decide my comic isn’t for them they’ve at least made a proper decision, but if they just walk past without glancing at it they may be missing out. That said, the people at MCM who stopped by my table were awesome and very much into the medium, so it was great to meet new people. And I like to run a tally of which characters I can find people cosplaying as and get a fist bump off them – MCM was off the chart for that! 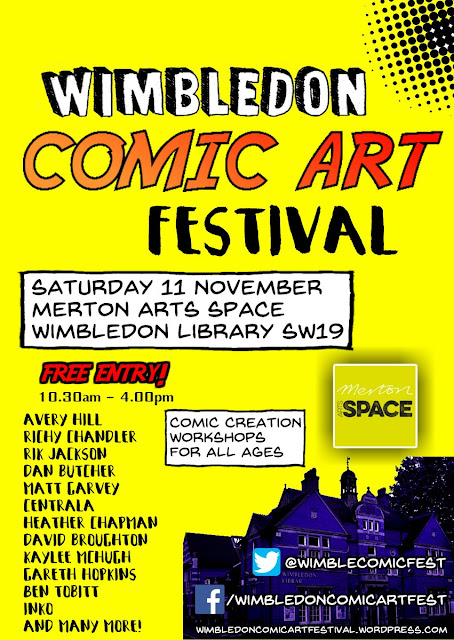 You and your son are doing a 4 pager for the next LittleHeroes comic...how did that come about? How are you finding working together?
My son Dylan is a huge comics fan and is always writing and drawing stuff, so I suggested last year we do something together. We actually put a pitch together for The Phoenix which they didn’t go for, but that didn’t stop us doing more stuff. When Little Heroes Comics announced ‘science’ as the theme for this years anthology we both jumped at it (Dylan loves science and aspires to work for NASA one day). We’ve really enjoyed working together on this. Dylan is writing and I am drawing.

He’s never written a script before so we spent time looking at scripts from his drama class to understand how they work. Then we took some time to compare live scripts to comic scripts, how they have to be different and what the most important things are that they need. We even turned one of Nick Prolix’s short strips into our own version of a script to see how it all fit together. Dylan’s picked
the skills up really well and I can honestly say I was very impressed with the quality of his first draft. We’re currently refining a couple of panels, but I’ve started the art for and its going well. Plus Dylan has a great sense of humour and has come up with a brilliant final panel which finishes it all off on a hilarious note.

What comics are you currently reading?
The new Green Lantern from Grant Morrison is top of my list at the moment. I love Green Lantern and Grant Morrison so it’s a great combo for me. Liam Sharp’s art is sickeningly good – some of those cityscapes and space shots blow my mind! I’ve also been following the Dick Tracy mini-series from IDW and have just picked up Blossoms 666 from Archie Comics. Cullen Bunn and Laura Braga doing an Archie Horror – of course I want to read that!


What Kickstarter projects have you backed recently?
The latest one is Sliced Quarterly from Ken Reynolds. This is the final edition, so I urge you all to get a piece of it while you can. I’ve got my eye on the Gallant & Amos collection from Little Heroes publishing arm Fairspark.