The Clockwork Cavalier is now on Kickstarter

Steve Tanner's Timebomb Comics have just launched a Kickstarter campaign to fund a spin-off comic from his Flintlock universe, The Clockwork Cavalier...

Frankly he had me when I saw the cover... 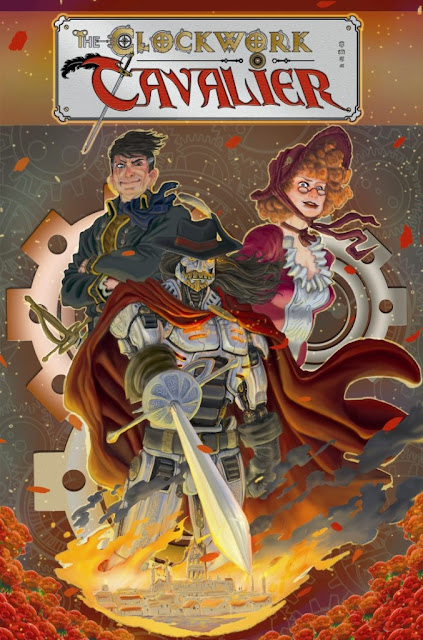 But let's hear a bit more about it from Steve...The Clockwork Cavalier Special's genre is best described as "clockpunk" - a retrofuturistic derivative of steampunk with a post Medieval, pre Victorian setting - and in this story the setting is London in the 1770s! Some of you may already be familiar with the Clockwork Cavalier who first appeared in a 6 page black and white complete short story in Book One of the unique historical anthology series Flintlock (itself a successful Kickstarter campaign back in 2016). In that tale, set in 1753, little was revealed about this mysterious clockwork automaton beyond that he had been recruited into the world's first organised  police force - the Bow Street Runners - to help them fight crime in 18th Century London. 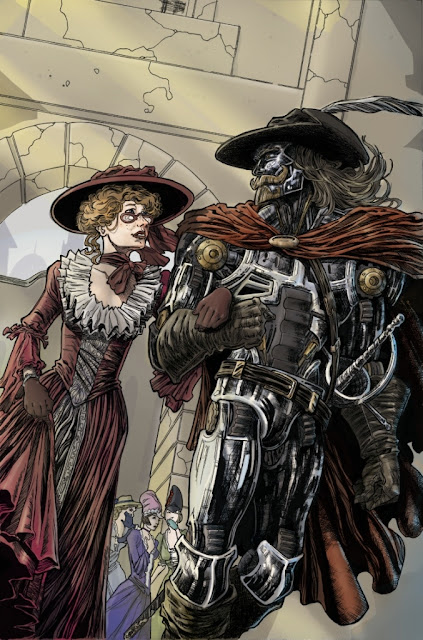 As well as the Clockwork cavalier, this Special also marks the debut of a brand-new character in the shape of Tilly Quickstep. How Tilly knows the Cavalier, the part she plays in the story and how through it she becomes a key player in our unique 18th Century setting is something I'm looking forward to revealing in the book. I think anyone who likes strong, female characters will really like Tilly, and  I really do think there isn't another female comics character like her!


The Cavalier's a great character to write, but what makes this Special even more, well, special, is the astonishing artwork produced by line artist Francesco Archidiacono and colour artist Ben Lopez in bringing the Cavalier's story to vibrantly detailed life. From the pillars of Covent Garden to the rolling fields of Hampstead Heath, both artists have done a terrific job of realising 1770s London, and some of the pages of Francesco's line art for the book are available as limited rewards in this campaign (see below for further details). Of course, I've also recruited regular Flintlock letterer Bolt-01 onto the team as well. 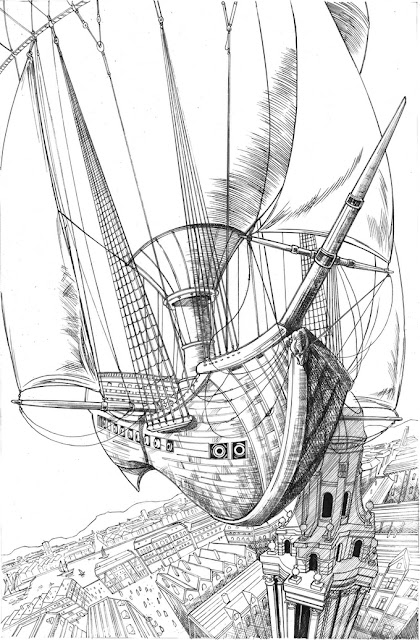 The stretch goals for the campaign are already lined up and ready to go once that £500 target (ludicrously low, think we can be pretty certain that this target will easily be broken pretty quickly).

I caught up with Steve recently to ask him about the Clockwork Cavalier...


The cover is amazing - who's the artist? Where did you find them? How did you hook up with them?
The cover is by the interior artists - Francesco Archidiacono and Ben Lopez. For the cover Francesco did the pencils and Ben finished it with colour as I wanted it to feel painted. This is my first time working with Fran, though it won't be the last. Ben I've worked with a couple of times now. Francesco came to me through our open submissions inbox. Time Bomb Comics is a tiny set up but gets loads of submissions and whenever someone catches my eye I get in touch with them eventually. Ben came to me at a con, showing me samples at the table.

How long did it take you to write Clockwork?
The original script was completed in May 2017, but I gave it a polish a year or so later. It was written as I was recovering from major eye surgery; I started to write it towards end March as my eyesight was coming back so it became a very cathartic experience. By the time I wrote The End on that first draft I could properly see again, although not as well as I used to.

And to get it drawn?
It was originally slated to be drawn by Ed Machiovello,  who did the two Clockwork Cavalier short stories in the first two Flintlock books. Ed completed the first 4 pages,  but then had to pull out. Luckily Francesco popped up soon  after, and to be honest he whizzed through it. All the line art was completed in about 4 months and now Ben is finishing up the colour work.

This looks like a single location story (rather than the short stories set around the world format that you've used in Flintlock) - how did you find that ? Liberating? Restricting?

If Flintlock is the TV show then the Clockwork Cavalier Special is the big budget movie is probably the best analogy - although these days the distinction between the two is less obvious I think. It was cool just being able to focus on a longer narrative, and include some lengthier character moments, but it's still fast paced. The biggest challenge was ensuring that it could be enjoyed as a stand alone but at the same time giving the regular Flintlock series readers something that didn't seem too separate from the shorter stories.

What made you focus on the CC for this comic? Have people really responded to him (?)
The plan (yes, there's a plan!) was to have occasional spin off books if there seemed an audience for it, so I'm pleased there seems to be. The Cavalier is pretty unique in the Flintlock timeline as he's the only fantastical character - the others are much more grounded in historical reality, and he was also very much embraced (as was Flintlock as a whole) by the splendid Steampunk community that I'm privileged to be considered part of. The Clockwork Cavalier is very much a Clockpunk concept so the Special allows me to ramp up the Clockpunk without it seeming out of place, which it may do if it was presented in Flintlock. I think too by calling something a Special there needs to be something special about it, and the Cavalier is definitely pretty special!

How do you come up with ideas for your Kickstarter stretch goals - I remember the Chirurgery for Flintlock book one...
Really, it's thinking about what would be something nice to have and a genuine keepsake, but not something that becomes a whole separate logistical nightmare to produce and send out. So no badges, patches or beanie hats! I like the prints as you can keep them with the book, and it gives the opportunity to see an artist you wouldn't expect to see drawing interior pages give their take on a character or concept. There's loads of great artists around, so it's great if they can do something that can be given away as a stretch goal print.


Do you approach artists or do artists approach you these days?
With Flintlock it's always by invitation, otherwise it's a combination of reaching out to creators I've spotted or seeing who's reached out to me.


Where will people be able to find you at conventions this year?
The usual haunts! I do all the MCM events, and usually have a presence at the main proper comic cons - Portsmouth,  Nottingham,  Edinburgh, and so on. I also get invited to be part of the Steampunk Asylum in Lincoln because of Flintlock and the more traditional Steampunk stories I've done set in the late 19th Century. Hands down, that's my favourite event of the year! I've been hitting the con circuit hard the last few years - doing about 26 a year - so easing off a bit in 2019 I think!


Thanks for your time Steve
Posted by Richard Sheaf at 06:00