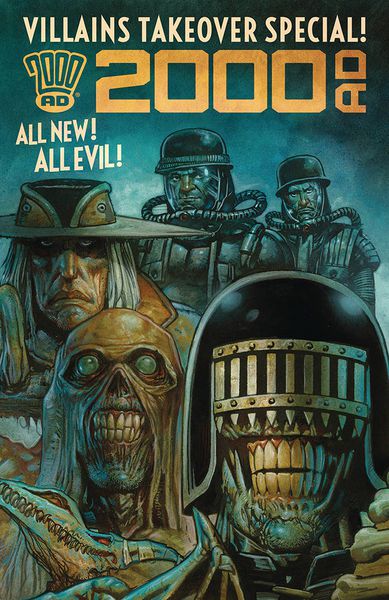 As is says (here) on the Forbidden Planet website...

As part of our celebrations for Free Comic Book Day, Forbidden Planet are delighted to announce an event with Droids Matt Smith, Greg Staples, Keith Richardson and Pye Parr for the 2000AD Villains Takeover Special, taking place at our London Megastore from 1 - 2pm on Saturday 4th May!


The bad guys are taking over the Galaxy’s Greatest Comic - with a nefarious special one-shot full of criminal capers and villainous ventures!
We have the very best forbidden felons and outlandish outlaws, the lawman of the future faces a familiar rictus grin in Judge Death: The Judge Who Laughs by Rob Williams and Henrik Sahlstrom; there’s fiendish fantasy with Lord Weird Slough Feg: Lord Of The Hunt by Pat Mills and Kyle Hotz; there’s chem-wreathed criminality in the world of Rogue Trooper in Brass and Bland: The Professionals by Karl Stock and Kael Ngu; there’s the malefactory mutant-bountyhunters-turned-bad-guys, The Stix, from Strontium Dog in Stix: Sleeping Dogs Lie by Matt Smith and Chris Weston; and all rounded off by Terror Tale: Last of the Hellphibians by that master of the mendacious Henry Flint!
Matt Smith, alias Cyber-Matt, is a British comics editor. He became editor of 2000AD in January 2002, and took over as editor of the   Judge Dredd Megazine in February 2006. Smith is 2000 AD's ninth Tharg, and its longest serving. He has written several Judge Dredd novels, several one-off Dredd stories for FCBD and instalments of the syndicated Dredd newspaper strip, as well as Top of the World, Ma-Ma, a comic strip prequel to the movie Dredd. He won Eagle Awards for favourite editor in 2007, 2008 and 2011.

If  you can't make the signing then you can order a signed copy of the comic right here
Posted by Richard Sheaf at 06:00