In these difficult Brexit times let's have a more gentle day on the blog...So here are a whole lot of ebay swipes of postcards relating to 'Teddy Tail' [of the Daily Mail - it rhymes you see]. 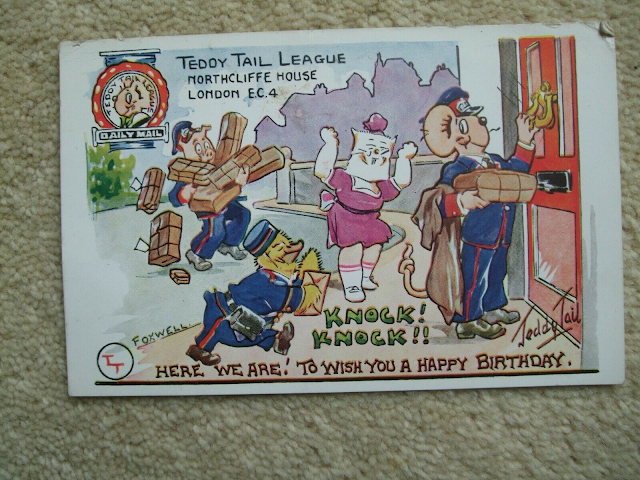 I'm sure this isn't a complete set of all the postcards (and birthday cards) that were produced to celebrate this hugely popular Edwardian comic character nearly 100 years ago... 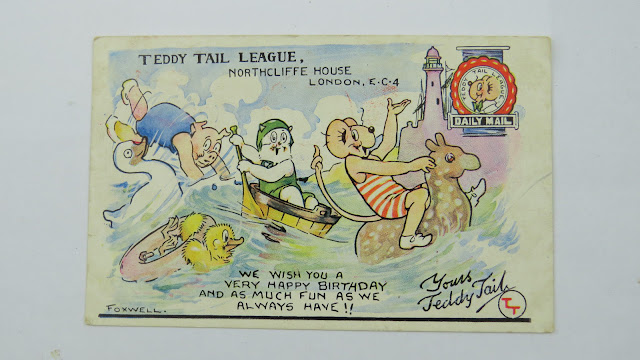 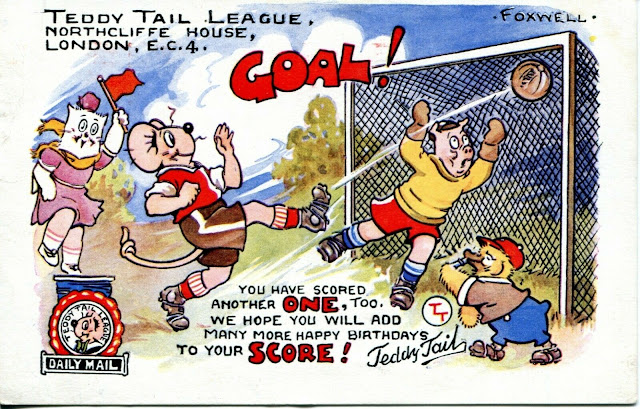 As it says on that Wikipedia (here) a British newspaper comic strip about a cartoon mouse featured in The Daily Mail from 5 April 1915. It was the first daily cartoon strip in a British newspaper (being also the first to use speech balloon rather than captions), The character survived until the 1960s with several artists drawing newspaper strips and the varied annuals. Such was his popularity that other newspapers created their own cartoon characters, the Daily Express with Rupert Bear and the Daily Mirror with Pip, Squeak and Wilfred. 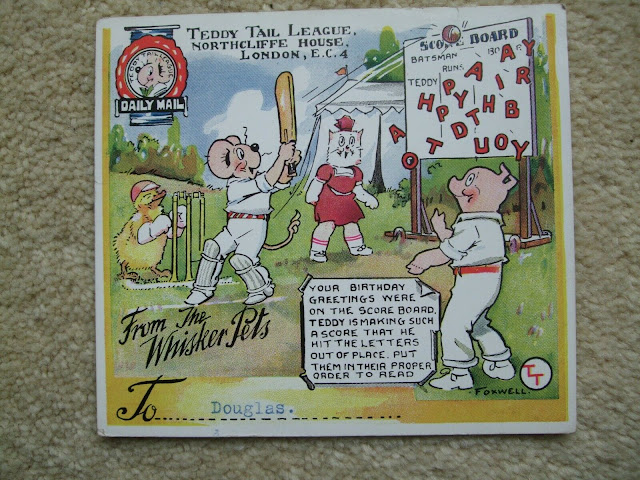 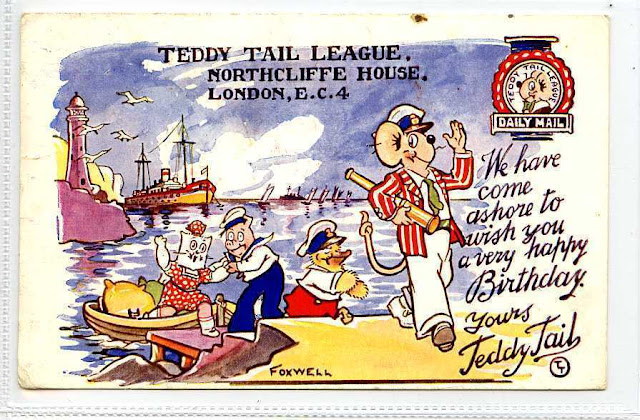 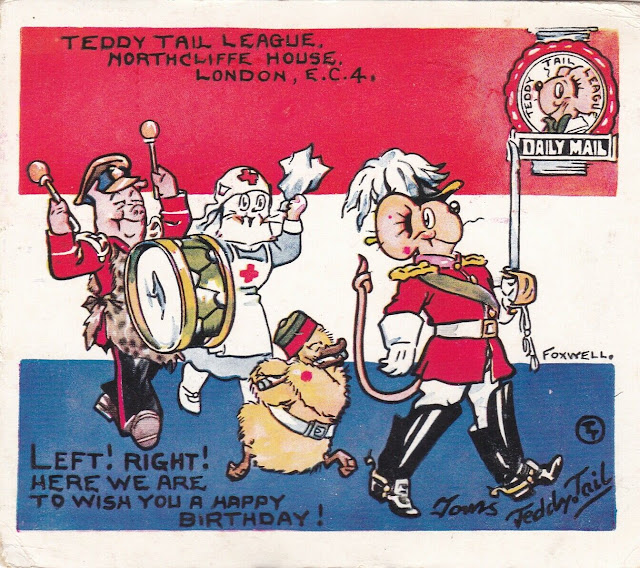 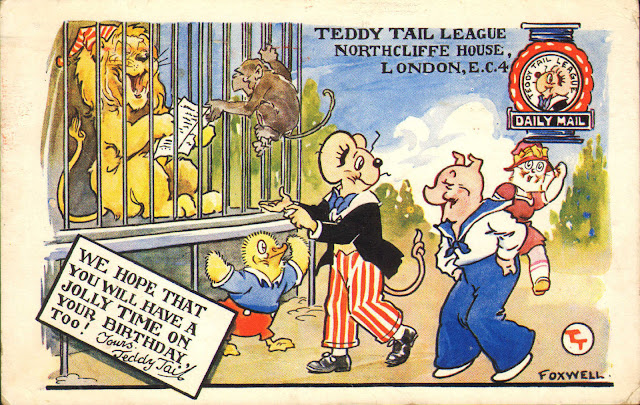 In April 1933 Teddy Tail was revived by the Daily Mail, with new drawings by Herbert Sydney Foxwell (1890–1943) who was already known as a cartoon illustrator having drawn Tiger Tim since the mid-1920s for the Amalgamated Press, later known as Fleetway. Tiger Tim had been part of the Bruin Boys since the early 1900s and featured in the Playbox annual since 1910 as well as his own annual since 1922. This second incarnation of Teddy Tail drew him as a schoolboy aged character and was aimed more at younger readers. He was part of a family group that lived in the village of Whiskertown including the 'Whisker Pets' which were looked after by Mrs Whisker, an adult mouse. Piggy the pig, Kitty Puss the cat and Dougie the duck. 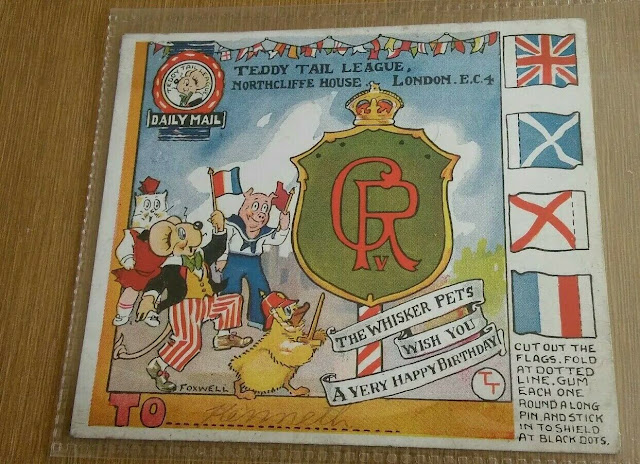 Teddy Tail annuals were issued from 1933 to 1940. Merchandising, following similar successes with Mickey Mouse were popular, such items as small toys, cut-outs, jigsaws and Teddy Tail biscuits were made.
The 'Teddy Tail League' was started also in 1933, which involved members receiving enamel badges, birthday cards and free advice on Pets or Hobbies, similar to the Pip, Squeak and Wilfred and Bobby Bear clubs. Special events and public activities were announced in the Daily Mail. In the 1936 Annual, mention is made of "750,000 members". You had to collect six 'seals' from the Daily Mail newspaper to enrol and get the badge and Membership rules card and learn of Teddy Tail's 'secret sign'. You could add 12 more 'seals' to get the Sports Badge according to the 1934 annual.
Foxwell died whilst on service in 1943 , bringing an end to the series until 1949. 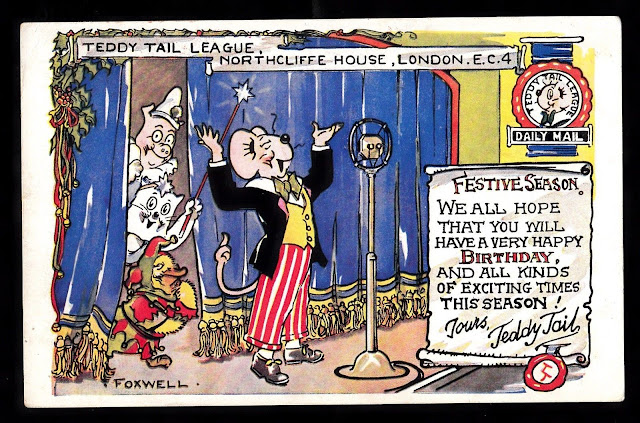 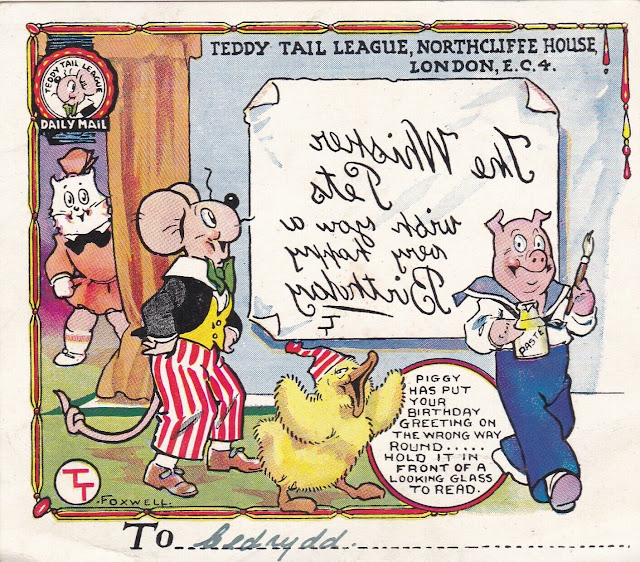 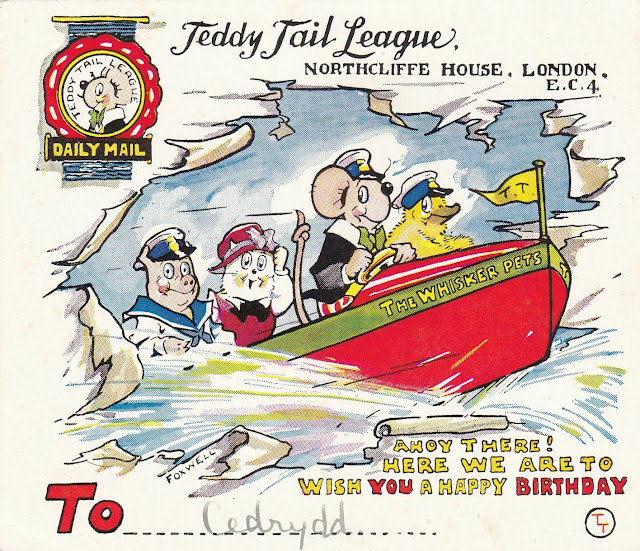 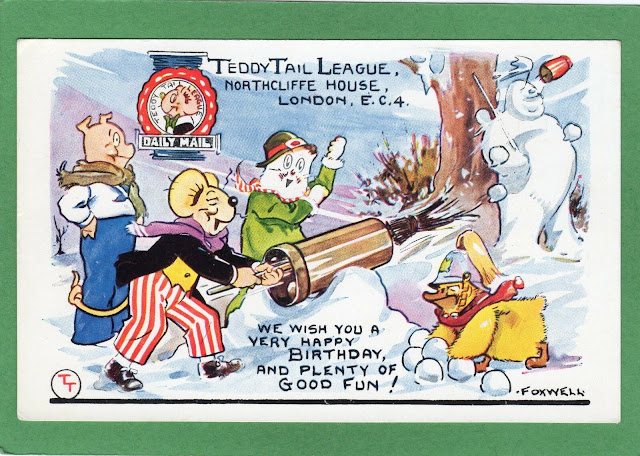