The new Comic Archive (following on from One-eyed Jack and the death of Valiant and Beyond 2000ad) volume from David McDonald's Hibernia comics imprint is out now!


This impressively researched and produced volume, building on the already high standards set by other volumes in the series, takes as its focus this time, the untimely demise of Fleetway's Scream comic.


As Scream only lasted 15 issues, you wouldn't think that there was 60+ pages to be written on the subject, especially as there aren't pages devoted to what was published in those 15 issues. Instead the volume focuses on what wasn't published in the weekly and what became of that material. The quick answer is that some of it ended up in the 5 holiday specials that were published after Scream had disappeared from newsagent's shelves and some of it was used up in the new Eagle.


Now not only has David gone through Scream's history with a fine toothcomb, he's actually re-invented some of that history with cover mock-ups for missing issues, he's tried to unearth the source of material that seems strangely out of place in Scream and he's publishing material that would have appeared in Scream and he's talked to key creators. I'm not sure we'll ever need another volume on the short life of Scream, what would anyone else add?

60+ A4 pages (some in full colour), hitherto unseen material, high production value, a definitive history of an opportunity missed. It's hardly ghastly, it's simply essential reading for anyone interested in (boys) comics.


Copies are available to buy here 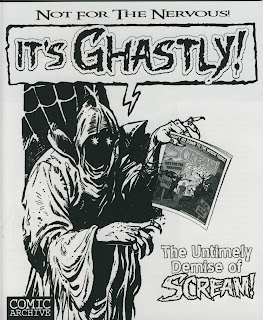 No further scans, you'll have to buy it if you want to see more :)

Full disclosure: David sent me a free copy of this (I had tried to buy it off him first, mind)﻿