Striker has been running (on and off, but mainly on, in the Sun newspaper since 1985) - it's graduated from a traditional pencil drawn strip to it's current CGI incarnation. It even had its own comic for a while. Lately though it's been ejected from the Sun (again), only for a fan campaign to succeed in getting it re-instated.


Now though Pete Nash it starting to reprint the stories from the very beginning. Over on his Strikerworld  forum (http://strikerworld.co.uk/index/) he's just announced the details of volume 1... 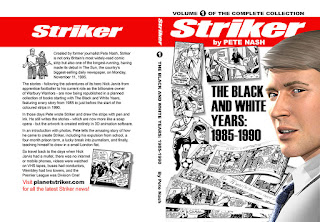 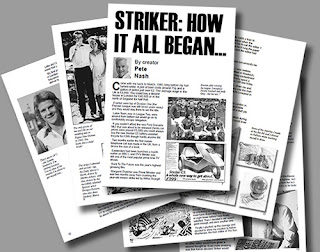 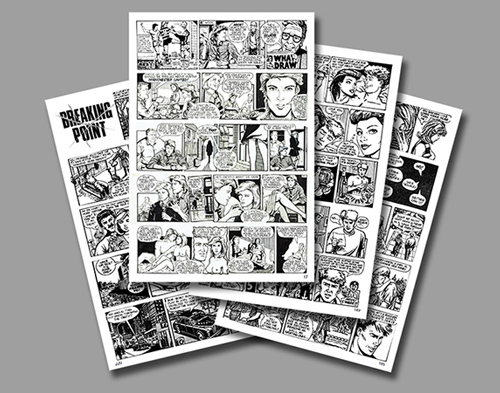 IT’S A MONSTER of a book that’s been 31 years in the making and at last it’s available to buy… Volume One of Striker: The Complete Collection – The Black and White Years, 1985-1990.

The book is A4 size, hardback with a gloss laminated cover, and has a whopping 320 pages. The Buy Now buttons (a choice of signed or unsigned) are at the end of this message. You can pay by credit card, debit card or your Paypal account if you have one.


The first ten pages of the book are a full and frank account (with photographs) of my meandering journey to the creation of Striker, including my expulsion from school, my time in prison during an unhappy and misspent youth, the lucky break that took me into journalism, and the many months of teaching myself to draw.


The rest of the book is crammed with all 21 Striker stories from November, 1985, to just before the start of the colour strips in 1990.


And there’s something else – the first Striker story is the original unabridged one that has never been seen since its first publication 31 years ago.


The version of the first Striker story that you may have seen in the comic and one of the only two Striker annuals that were published – back in 1989 and 1990 – was a shortened one that I created because I hated my early artwork. I thought there were maybe a dozen or so strips that I’d left out but when I compiled the strips for this book, I discovered there was almost two months’ worth of strips that I’d removed from history. I should never have done that, and I’ve made up for it now.
I’ve also added my thoughts and memories on the stories at the end of each one and before the start of the next. And I explain why I don’t think the first story could ever have been published today – at least not in The Sun.

I must make an apology at this point – I’ve had to make the price £19 (plus £5 first class postage) instead of the £18 I’d hoped for as I hadn’t accounted for Paypal’s transaction charge in addition to their commission. I’m sorry for that but I hope you will agree the book is still great value for money.
There are two purchase options: £24 (including first class mailing) for an unsigned copy or £29 for a signed copy. But please note – it may not be possible to deliver the signed books by Christmas as it will mean me travelling to the mailing house to do the signings, and I won’t be able to do this until after the unsigned books have been dispatched.


The books will be mailed by first class post in book boxes between December 16 and 18. The signed books may still arrive by Christmas, but don’t expect them to be.


I’m asking Striker fans to buy the books now rather than later for two reasons – one, The Sun’s fee doesn’t cover Striker’s production costs anymore and two, there’s a limited print run for this first edition. As a thank you to those who buy before November 11, I’ll be giving away 10 original strips from the first Striker story – each one signed – to ten purchasers whose names will be drawn from a hat. Each book purchase will count as a separate entry in the draw.


One of those ten strips will be the very first strip that I rejected at the last minute (I explain why I pulled it in the book).


This is an offer to Strikerworld and Planet Striker members only. The books will NOT be advertised in The Sun or sold in the shops unless there are any left over.


If we sell enough copies to make a profit, I shall publish a new volume every three months.


I think that’s about it. All that remains is to say thanks for buying the book and I hope you enjoy it. And let me know what you think afterwards!


The book is available to buy here...although you need to be a member of Strikerworld, that's a process that takes about 10 seconds to complete...
http://strikerworld.co.uk/pages/shop/
Posted by Richard Sheaf at 06:00